When Will the Gold Bubble Burst?

The gold seems to be becoming the favorite investment around as the traders are afraid of the crisis and the fiat currencies seem to be in a great danger when all those
measures will induct a massive wave of inflation, reducing the moneyâs buying power. In such an environment gold looks like a good investment to save oneâs assets and to multiply them if you trade with a considerable leverage. Forex traders may also decide to capitalize the expected upward gold trend as many Forex brokers provide the gold vs. dollar or gold vs. euro pairs.
There is one problem with investing in the gold now â itâs already way overbought. For almost ten years â from 1995 to 2005 the gold has been trading between $250 and $420 per troy ounce. The gold began its rally in 2005 and peaked above $1,030 in March 2008. Now itâs trading not far from that level â near $940 per troy ounce. Goldâs «bubble rally» accompanied the similar rallies in carry trade (GBP/JPY, EUR/JPY, AUD/JPY currency pairs, etc.) and in oil. Both the carry trade and the oil rallies ended with the bubble bursts as the financial crisis reached its apogee in September 2008. The gold bubble lived through that period falling to is local minimum of $680 in October and that minimum was far above the recent average trading range for this commodity. You can compare a carry trade unwinding with the drawdown in the gold prices during the crisis time from these charts: 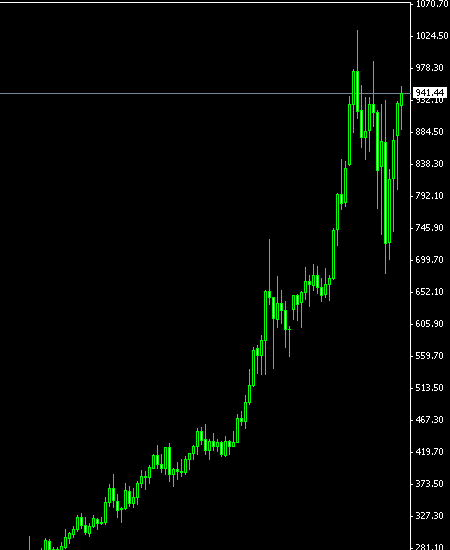 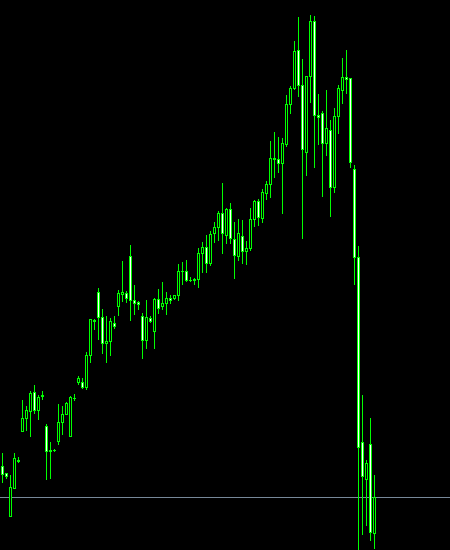 AUD/JPY Chart
The gold is praised by many as the real investment in the world full of the paper money and the bills that go default or the shares of the companies that may just vanish. Gold is seen as some kind of a standard of value compared to other assets. Average Joe might even hope to use the gold as the method of payment during the harshest times when the fiat currencies wonât be considered as anything worthy. In reality gold has almost no real value. Of course, itâs nice and makes a good jewelry but its value has nothing to do with its current price. The current price was raised by the investors, traders and the  speculators. Investors opt to gold as the safe haven investment, traders buy it because they can get an almost ROI during the time of the  interest rates; the  speculators just find a good opportunity in riding the wave and gaining from the daily or weekly on the gold market.
But the bubble will continue to grow until one day it bursts. So, when will it happen? It will happen only when two conditions become true. First, the financial markets should offer something else for the investors to get in â the higher interest rates by the major central banks is a good indicator that the investors now have better ways to multiply their funds than sitting on the piles of gold. Second, stability should rule the finances â not many investors will go investing into South African or Russian papers (which still offer more than 10% ROI) if there is a high probability to lose their money. Gold offers safety and the new investments should be also considerably safer. When the traders will have something new to invest in and the safety of their funds will become satisfying they will start to move out of the gold gradually. When the  speculators realize that the gold is falling they will start to bet on the short side, pushing the gold down faster, which will trigger the major of many investors forcing them out of this asset. As the oil fell from near $150 to $40, the gold will probably fall from $1,000-$1,200 to about $400 in a period of a month or two.
It canât be known exactly when the right time for the burst comes. For now gold is still a good buy â central banks maintain the  interest rates, the risks are high and the  is the general trend. The gold should flourish at least for the next several months, bellying the bubble even further. Iâd watch closely for the U.S. interest rate and if it comes close to 3–4% (and they will eventually have to increase the rates because of the budget inflation) that means the major part of the gold investors will start to slowly move out of it. But for now, selling the gold probably wonât be a good trade.
Update: You can also read my February 2010 technical report on the  state of gold bubble.