EUR/USD rebounded today, receiving boost from French banks shares. Earlier the currency pair dropped as expectations of joint actions by Germany and France to resolve the European debt crisis proved to be wrong. Import and export prices in the US showed a positive tendencies last month, but the positive effect of the report was overshadowed by the growing US Treasury budget deficit.
Import prices declined 0.4% in August, following the 0.3% rise in the previous month and compared to the median forecast of a 0.7% decline. The drop was led by the 1.8 percent decrease in fuel prices. On the other hand, Import prices rose 0.5% in August after they decreased 0.4% in July. (Event A on the chart.)
US Treasury budget balance deficit widened from $129.4 billion in July to $134.2 billion in August. That’s instead of an expected decrease to $128.4 billion. (Event B on the chart.)
On Friday, a report on wholesale inventories was released, showing an increase by 0.8% in July, which followed the rise by 0.6% in June. 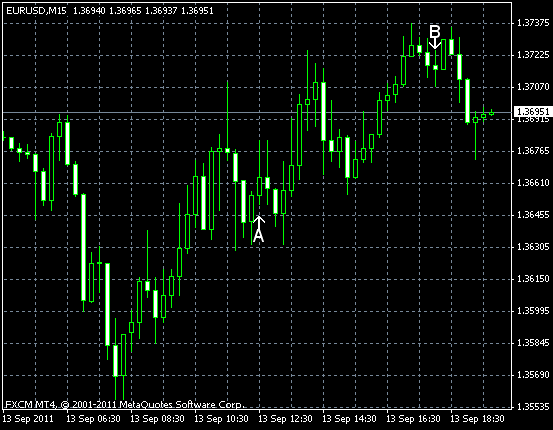