EUR/USD declined today as the positive ADP employment report made Forex traders hope the  payrolls (released later this week) would be good. The services sector of the United States continued its expansion in September with almost the same pace as in the month before. Federal Reserve Chairman Ben Bernanke testified yesterday, speaking about problems that the economic recovery has encountered.
ADP employment report showed an improvement of the US labor market, as the September rise of employment by 91k jobs was higher than the median forecast of 76k and slightly above the August growth of 89k (revised from 91k). (Event A on the chart.)
ISM services PMI decrease a little to 53.0% in September from 53.3% in August, exactly as analysts predicted. (Event B on the chart.)
Crude oil inventories decreased by 4.7 million barrels from the previous week to 336.3 million barrels and are in the upper limit of the average range for this time of year. Total motor gasoline inventories decreased by 1.1 million barrels last week and are above the upper limit of the average range. (Event C on the chart.)
Yesterday, a report on factory orders was released, showing a decline by 0.2% instead of an expected increase by the same rate. (Not shown on the chart.) The July increase was revised from 2.4% to 2.1%. 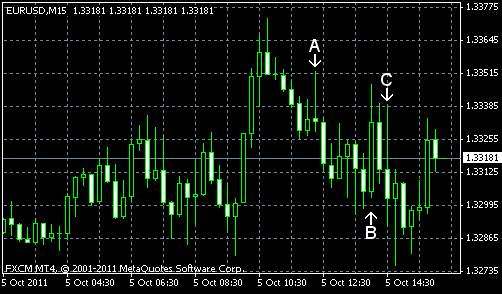