EUR/USD rallied today as the positive US nonfarm payrolls increased risk appetite among Forex traders, but sharply dropped after Fitch Rating cut credit rating of Italy and Spain. Payrolls rose in September much more than were predicted, while the growth in the prior month was upwardly revised. Other reports were also good, with the notable exception of consumer credit that unexpectedly slumped in August, showing the worst reading since April 2010.
US nonfarm payrolls climbed 103k in September, almost twice the expected figure of 55k. The August reading was positively revised from zero growth to 57k. Unemployment rate remained unchanged at 9.1%. (Event A on the chart.)
Wholesale inventories rose 0.4% in August. The rate of growth was lower than market expectations of 0.6% and also below the July increase by 0.8%. (Event B on the chart.)
Consumer credit reversed its growth in August, falling by $9.5 billion, following the advance by $11.9 billion in July. Analysts hope for $8.0 billion increase. (Event C on the chart.)
Yesterday, a report on initial jobless claims was released, showing a small increase from 395k to 401k last week, instead of the expected rise to 411k. (Not shown on the chart.) 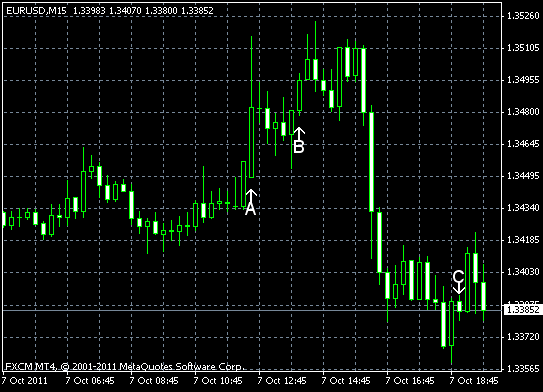