EUR/USD currency pair was initially boosted by the optimism, caused by the G20 meeting. The leaders of the European Union started to devise a plan for dealing with the debt crisis and euro bulls were happy to hear about readiness of European politicians to resolve the matter. Yet the euro gave away its gains as Steffen Seibert, spokesman of German Chancellor Angela Merkel, said there’s no way to end the crisis quickly. The news from America weren’t good either, as the manufacturing conditions in New York continued to deteriorate.
NY Empire State Index improved a little to -8.5 in October from -8.9 in September, but was nowhere near forecasts of -3.9. The index indicates that conditions for New York manufacturers continues to deteriorate. (Event A on the chart.)
Industrial production and capacity utilization was little changed and near forecasts in September. Industrial production increased 0.2%, exactly as analysts expect, in September after having been unchanged in August (the rate of change was revised from 0.2% to 0.0%). Capacity utilization rose a little to 77.4% last month. The previous reading was revised from 77.4% to 77.3%, while the forecast value was 77.5%. (Event B on the chart.) 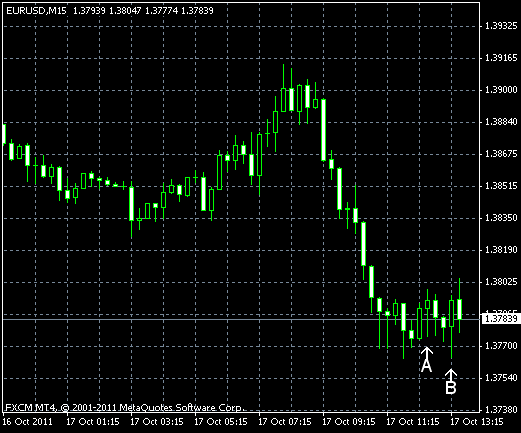