EUR/USD virtually hasn’t gone anywhere in the past three days. The currency pair shows strong swings, but ends at about the same level as the sentiment about Europe and its problems changes from optimistic to pessimistic and than returns to optimism almost every hour, if not a minute. Generally, uncertainty plays more in favor of the dollar and currently the euro declines, following the big jump earlier this session. The data from the US was somewhat mixed today, but for the most part it was proving the recovery is underway in America.
Initial jobless claims went down to 403k in the week ending October 15 from the previous week’s revised figure of 409k. The forecast was 401k. (Event A on the chart.)
Existing home sales declined to the seasonally adjusted annual rate of 4.91 million in September from the upwardly revised 5.06 million in August, being below the forecast figure of 4.94 million. (Event B on the chart.)
Philadelphia Fed Manufacturing Index increased from -17.5 in September to 8.7 in October, showing the first positive reading in three months. Traders were more pessimistic before the report, expecting a negative reading of -9.0. (Event B on the chart.)
Leading indicators increased 0.2% in September, following the 0.3% increase in August. Economists have hoped the index would rose with the same 0.3% pace. (Event B on the chart.) 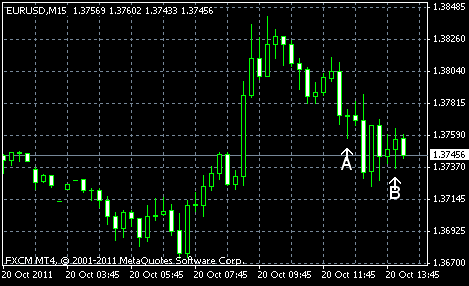