EUR/USD surged today to the highest level since September 7 as the European leaders made progress in devising plans for helping the  members of the European Union. The EU chief agreed to increase the bailout fund and to write down part of Greece’s debt. The US economy was expanding with faster pace in the past three months, but the reports about the housing market make traders scratch their heads. The bad report was followed by the good report, while today another bad report was released. The housing market is one of the major issues for the US economy, but currently it’s nearly impossible to gauge its state with such contradicting reports.
Advance report on US GDP was released today, showing an increase of 2.5% in the third quarter of 2011. That’s a big improvement over second quarter’s 1.3% and higher than forecast 2.4%. (Event A on the chart.)
Initial jobless claims were at the seasonally adjusted adjusted rate of 402k in the week ending October 22. It was a small change from the slightly revised 404k in the preceding week and in line with forecasts of 400k. (Event A on the chart.)
Pending home sales fell 4.6% in September, following the 1.2% drop in August. The report frustrated market participants who expected an increase by 0.2%. (Event B on the chart.) 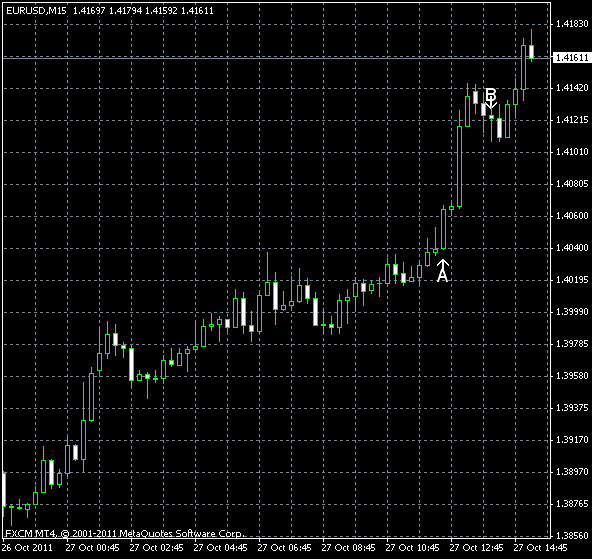