EUR/USD was falling today, but erased most of its losses after the  the European Central Bank as President Mario Draghi was less dovish than expected. (Event A on the chart.) Some speculators expected an interest rate cut, but such expectations haven’t come true. The US service industries didn’t demonstrate particularly good performance. Unemployment claims fell more than was predicted by analysts.
Initial jobless claims was down to 365k last week from the previous week’s 392k. A reading of 381k was expected. (Event A on the chart.)
Nonfarm productivity (preliminary) decreased at the 0.5% annual rate during the first quarter of 2012, in line with forecast of a 0.4% decline. The previous quarter’s increase was revised from 0.7% to 1.2 percent. (Event A on the chart.)
ISM services PMI was at 53.3% in April. Only a small drop to 55.5% from the March figure of 56.0% was expected. (Event B on the chart.) 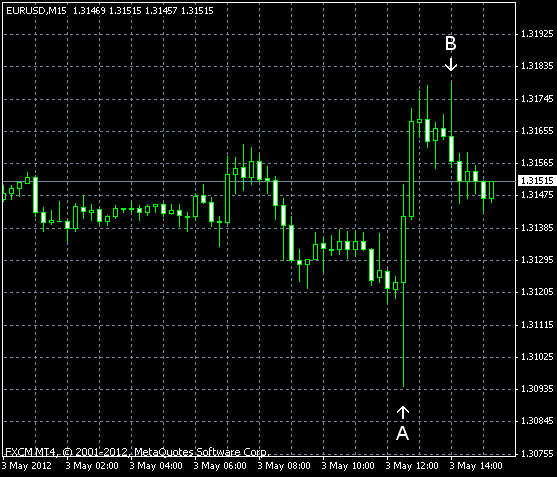