EUR/USD Falls for Second Day on Political Uncertainty in Greece

EUR/USD dropped for the second session today as Greek political parties failed to reach an agreement and form a government after the weekend’s election. It looks like the Hellenic Republic may become a main source of fears for traders yet again. US consumers borrowed more than was estimated by analysts, signaling that the economy of the United States remains in good shape even after the poor employment growth.
US crude oil inventories increased by 3.7 million barrels last week and are above the upper limit of the average range for this time of year. Total motor gasoline inventories decreased by 2.6 million barrels and are in the middle of the average range. (Event A on the chart.)
On Monday, a report on consumer credit was released, showing an increase by $21.3 billion. Analysts expected the rate of growth to be stable near $9.6 billion. The previous reading was revised from $8.7 billion to $9.3 billion. (Not shown on the chart.) 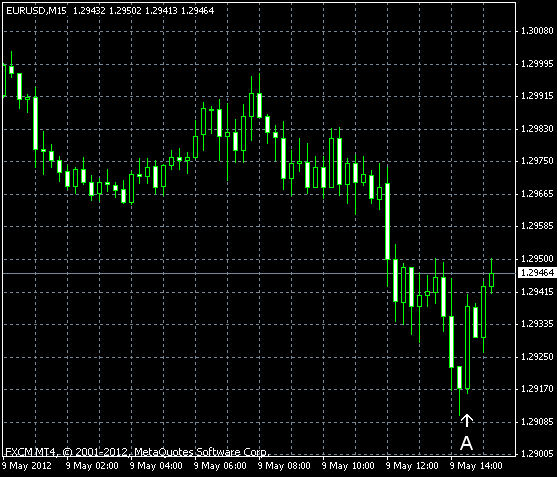