EUR/USD rose today after a report showed that the German economy grew last quarter, avoiding recession. (Event A on the chart.) The currency pair erased its gains and fell to the lowest level since January as Greece prepares for a new election after political parties failed to form a new government. It is quite possible that Greeks would favor parties that reject austerity measures demanded by the European Union and the International Monetary Fund. US retail sales and inflation were somewhat worse than expected, but manufacturing and net foreign purchases beat forecasts by a huge margin.
Retail sales rose 0.1% in April, in line with forecast of a 0.2% increase. The March reading received a minor revision from 0.8% to 0.7%. (Event B on the chart.)
US CPI was unchanged (0.0% change) in April, while forecasters promised a small increase by 0.1%. The March advance was 0.3%. (Event B on the chart.)
NY Empire State Index jumped from 6.6 in April to 17.1 in May. The increase was much bigger than the anticipated rise to 9.3. (Event B on the chart.)
Net foreign purchases climbed from $10.1 billion in February to $36.2 billion in March. The median forecast was just $19.4 billion. (Event C on the chart.)
Business inventories were up 0.3% in March. Traders expected that the rate of increase would be 0.5%, close to the February’s 0.6% rate of growth. (Event D on the chart.) 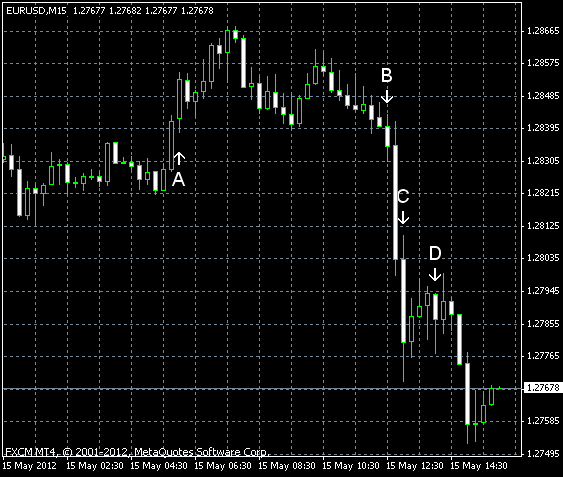