EUR/USD Drops on Growth Forecast, Trims Losses on US Payrolls

EUR/USD dropped today as Germany’s Bundesbank lowered its growth forecast. The currency pair trimmed losses after US nonfarm payrolls came out much better than was anticipated. Many Forex traders still look into the future with a degree of pessimism, but the good US employment data improved the outlook a bit.
Nonfarm payrolls grew by 146k in November, much more than analysts have predicted (89k). The October change was revised down from 171k to 138k. The unemployment rate unexpectedly fell from 7.9% to 7.7%. (Event A on the chart.)
Michigan Sentiment Index was at 74.5 in December (preliminary), below the forecast of 82.4 and the November figure of 82.7. (Event B on the chart.)
Consumer credit grew by $14.2 billion in October from September, beating market expectations of $10.4 billion. The September change was $12.2 billion. (Event C on the chart.)
Yesterday, a report on initial jobless claims was released, showing a drop from 395k to 370k last week. The median estimate of analysts was somewhat higher at 378k. (Not shown on the chart.) 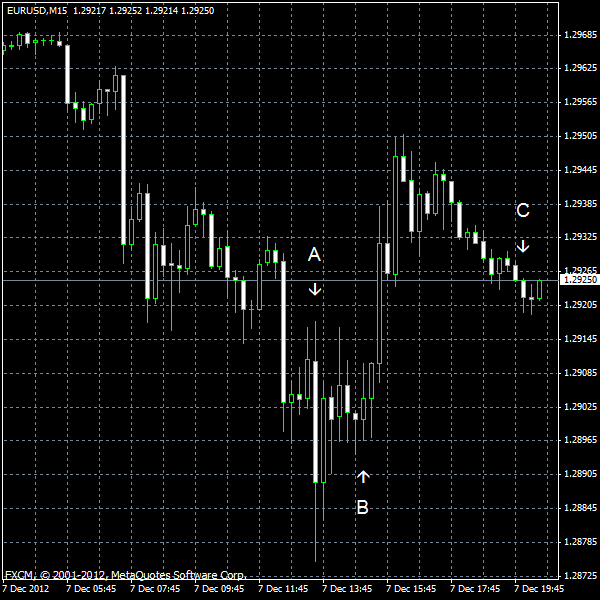