EUR/USD soared today, reaching the strongest level since April, as the Federal Reserve extended its asset purchase program. The Fed will maintain stimulus as long as unemployment remains at elevated levels. Today’s trading session was notable for bad macroeconomic reports from both the United States and the European Union, but that did not deter the currency pair from rallying.
Import and export prices fell in November. Import prices dropped 0.9%, following the advance by 0.3% in the preceding month, compared to the expected drop by 0.4%. Export prices declined 0.7% last month after staying unchanged the month before. (Event A on the chart.)
US crude oil inventories increased by 0.8 million barrels last week, while a decline by 2.6 billion was predicted by analysts, and are well above the upper limit of the average range for this time of year. Total motor gasoline inventories increased by 5.0 million barrels and are in the upper half of the average range. (Event B on the chart.)
FOMC decided to extend its asset purchases by $45 billion per month and also said that it will maintain the monetary policy extremely accommodative as long as unemployment remains high:

Treasury budget deficit widened from $120.0 billion in October to $172.1 billion in November. Analysts have expected a deficit of $160.0 billion. (Event D on the chart.) 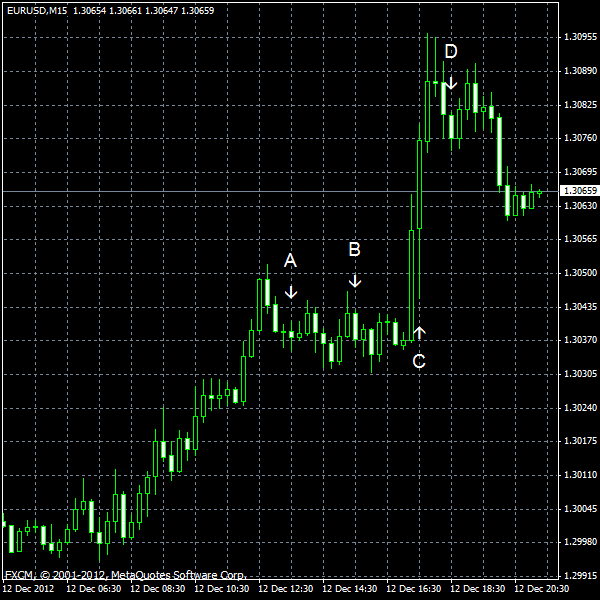