EUR/USD Fluctuates as US Politicians Vote for Plan B

EUR/USD was volatile today, but is trading near the opening level now, as the US House of Representatives is going to vote for Speaker John Boehner’s “plan B” that includes extending tax breaks, while increasing tax on rich people at the same time. Most data from the United States was much better than expected. Some reports, including jobless claims and the leading index, deteriorated, but were in line with forecasts.
Initial jobless claims rose from 344k to 361k last week, matching market expectations. (Event A on the chart.)
USD GDP increased at the annual rate of 3.1% in the third quarter of 2012 from the second quarter, according to the final estimate, beating the forecast of 2.8%. In the second quarter, GDP increased 1.3%. (Event A on the chart.)
Existing home sales were gaining momentum, rising the at seasonally adjusted annual rate of 5.04 million in November from the downwardly revised 4.76 million in October. Analysts’ prediction was 4.88 million. (Event B on the chart.)
Philadelphia Fed manufacturing index showed a substantial improvement, jumping from â10.7 in November to 8.1 in December, reaching the highest reading since April. The forecast was nowhere near the actual value, pointing at -2.2. (Event B on the chart.)
Leading indicators declined 0.2% in November, matching forecasts exactly. The decline followed the 0.3% increase in October. (Event B on the chart.) 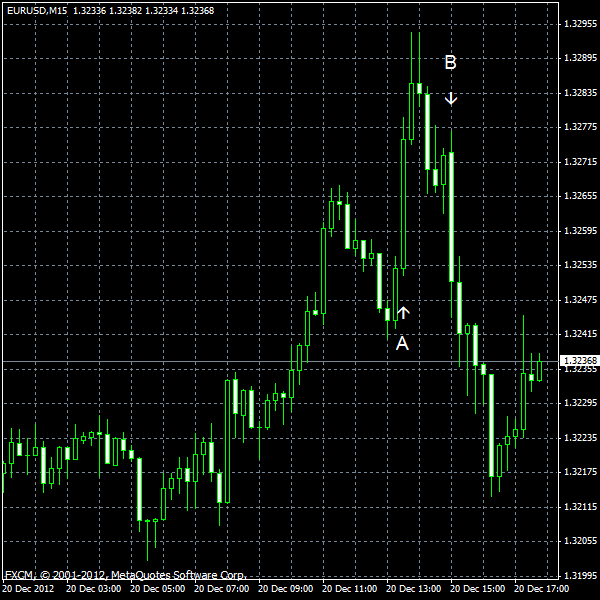