EUR/USD rose today, erasing yesterday’s drop, as traders thought that the losses were overdone. Fear is leaving the Forex market and safer assets, including the dollar, find less demand from investors. Macroeconomic reports from the eurozone added to optimism as inflation stayed little changed at 1.7%, while the German economic sentiment declined, but remained near the highest level since 2010. (Event A on the chart.) News from the United States was less encouraging, but this did not prevent the currency pair from rising.
CPI fell 0.2% in March on a seasonally adjusted basis. The drop was not expected by market participants as they have thought that the index would stay unchanged (posts 0.0% change). Inflation accelerated 0.7% in February. (Event B on the chart.)
Housing starts increased to the seasonally adjusted rate of 1.036 million in March from February, when the rate was at 0.968 million. Experts promised a decrease to 0.930 million. At the same time, building permits dropped from 0.939 million to 0.902 million, while forecasters promised them to stay unchanged. (Event B on the chart.)
Industrial production grew 0.4% in March, slower than in February (0.7%), but somewhat faster than was anticipated (0.3%). Meanwhile, capacity utilization fell from 79.6% to 78.5%, matching forecasts. (Event C on the chart.) 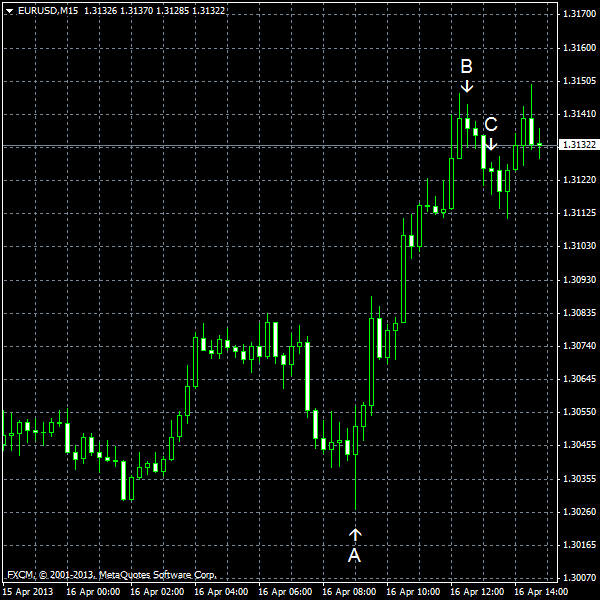