EUR/USD Attempts to Recover on US Data, Yellen’s Comments

EUR/USD was falling today, but now is attempting to recover as today’s macroeconomic data from the United States was rather disappointing, at least to those traders who were bullish on the dollar. Speech of Federal Reserve Chairman nominee Janet Yellen contributed to the dollar’s weakening as she suggested that it is too early to consider reduction of stimulus measures. This week is relatively poor on the data front. Several releases are scheduled for tomorrow, but nothing particularly important.
Trade balance deficit widened from $38.7 billion in August to $41.8 billion in September, while analysts expected it to stay at the same level. (Event A on the chart.)
Initial jobless claims were at 339k last week, little changed from previous week’s revised 341k (336k before the revision). Dollar bulls counted on decrease to 331k. (Event A on the chart.)
Nonfarm productivity growth was at the 1.9% annual rate in the third quarter of 2013 — smaller than in the second quarter (2.3%), but bigger than was forecast (1.3%). (Event A on the chart.)
US crude oil inventories increased by 2.6 million barrels last week and are above the upper range for this time of year. This is compared to the forecast of a 0.7 million increase and the rise by 1.6 million in the previous week. Total motor gasoline inventories decreased by 0.8 million barrels, but are near the top of the average range. (Event B on the chart.)
Yesterday, a report on treasury budget was released, showing a deficit of $91.6 billion in October, compared to the expected deficit of $104.3 billion. Surplus of $75.1 billion was registered in September. (Not shown on the chart.) 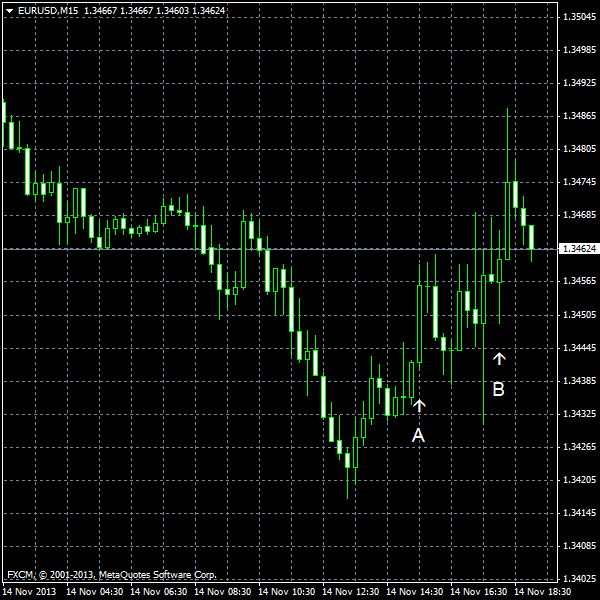