Today’s US fundamental data suggested that the economy is underperforming and this contributed to the dollar’s weakness. Additionally, the negative reports supported the view that it is too early for the Federal Reserve to scale back stimulus. EUR/USD was already attempting to rally on such outlook and was able to do so today.
NY Empire State Index fell from 1.5 in October to -2.2 in November, indicating worsening conditions for manufacturers. It was a complete surprise to economists who expected an increase to 5.2. (Event A on the chart.)
Both import and export prices were down in October. Import prices fell 0.7% after rising 0.1% in September, more than analysts have forecast — 0.4%. Export prices declined 0.5% following the 0.4% increase the previous month. (Event A on the chart.)
Industrial production and capacity utilization edged down in October. Production fell by 0.1% instead of rising by the same rate, as forecasters promised, following the 0.7% increase in the prior month. It was expected that capacity utilization would stay at 78.3%, but it actually dropped to 78.1%. (Event B on the chart.)
Wholesale inventories rose 0.4% in September, less than was forecast (0.5%) and than in August (0.8% — revised up from 0.5%). (Event C on the chart.) 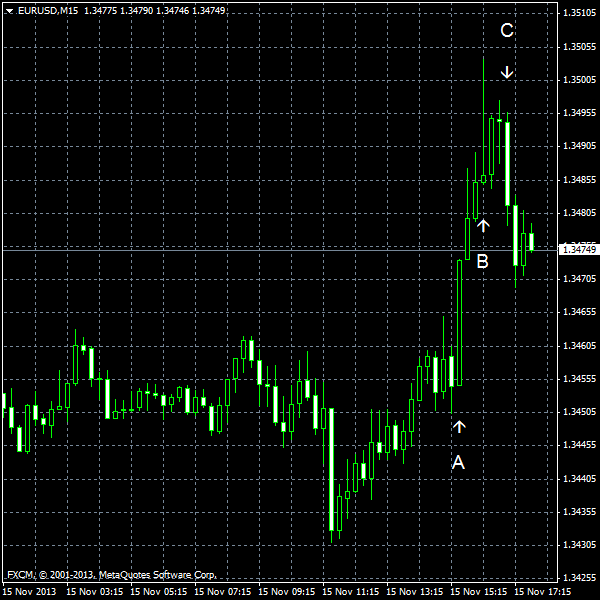