EUR/USD was falling today, dragged down by positive housing reports from the United States, but rebounded after data showed that US consumer confidence continued to worsen.
Building permits were at the seasonally adjusted annual rate of 1,034k in October, rising from the 974k September level. A drop to 940k was expected by analysts. The September data was released just today because of the government shutdown in October. Moreover, the housing starts data for September and October was not yet released. (Event A on the chart.)
S&P/ home price index rose 13.29% in September on a  basis, exceeding the forecast growth of 12.8% and the predicted increase by 13.0%. (Event B on the chart.)
Richmond Fed manufacturing index surged to 13 in November from the previous month’s reading of 1. Analysts have anticipated just a small increase to 3. (Event C on the chart.)
Consumer confidence was at 70.4 in November falling from the upwardly revised October level of 72.4. The median forecast was at 72.2. (Event C on the chart.)
Yesterday, a report on pending home sales was released, showing a drop by 0.6% in October following the 4.6% drop in September (revised from 5.6%). The actual data was far worse than the expected increase by 2.2%. (Not shown on the chart.) 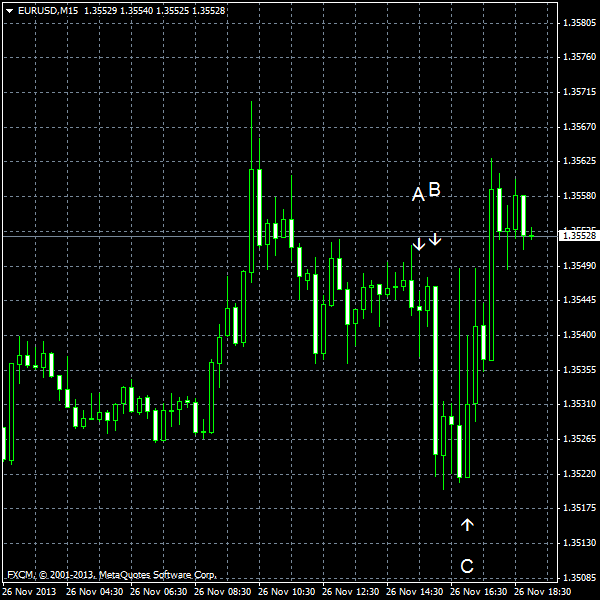