EUR/USD attempted to extend yesterday’s rally at the start of today’s trading session but was unable to keep gains, trading near the opening level right now. The euro was trying to gain on the dollar with help of speculations that the European Central Bank will delay an implementation of additional stimulus. The dollar was resilient due to some positive data from the United States, including the income and spending figures as well as the manufacturing index. At the same time, the unexpected increase of unemployment claims hurt the strength of the US currency.
Initial jobless claims rose from 330k to 344k last week. It was an unexpected turn of events for those market participants who have counted on a drop to 317k. (Event A on the chart.)
Both personal income and spending grew in March. Income increased 0.5% after rising 0.4% in February. Spending rose 0.9% following the increase by 0.5% in the previous month. Market expectations were at 0.4% and 0.7% for income and spending respectively. (Event A on the chart.)
ISM manufacturing PMI climbed from 53.7% in March to 54.9% in April, exceeding the figure of 54.3% projected by analysts. (Event B on the chart.)
Construction spending increased 0.2% in March from February, trailing the consensus prediction of 0.5%. The previous month’s change was revised from 0.1% to -0.2%. (Event B on the chart.) 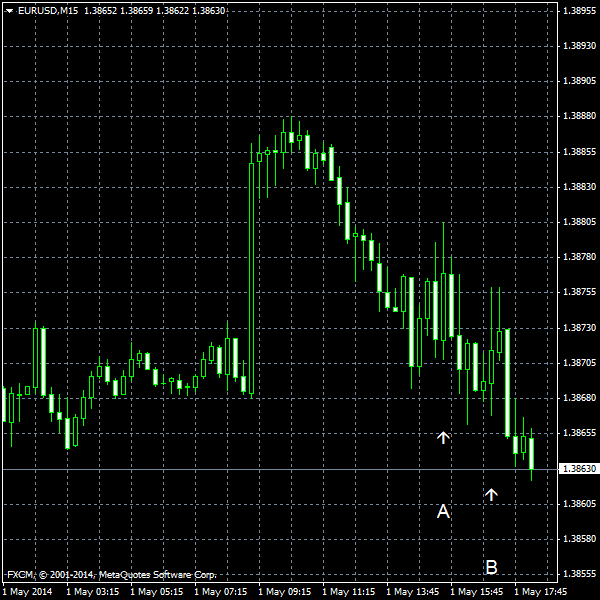