EUR/USD Reverses Gains After Set of Good Reports from USA

EUR/USD dropped today, reversing yesterday’s gains, after a bunch of good economic reports was released from the United States. It allowed the dollar to gain on the euro ahead of Thursday’s report that is expected to show a deterioration of the US economy. The euro was also weak due to yesterday’s speech of European Central Bank President Mario Draghi who yet again signaled about a high probability of additional monetary stimulus in June.
Durable goods orders rose 0.8% in April. This is compared to the predicted drop by 0.5% and the March increase by 3.6%. (Event A on the chart.)
S&P/ home price index rose 12.4% in March from a year ago and 0.87% from the previous month. The reading was lower than the February’s 12.9% but higher than the forecast $11.9%. (Event B on the chart.)
Richmond Fed manufacturing index stayed at 7 in May, unchanged from April, while analysts predicted a small drop to 5. (Event C on the chart.)
Consumer confidence rose to 83.0 in May up from 81.7 (revised from 82.3) in April. The median forecast was at 83.2. (Event C on the chart.)
On May 23 (Friday), a report on new home sales was released, showing an increase from 407k in March to 433k in April, which was bigger than the predicted rise to 426k. (Event C on the chart.) 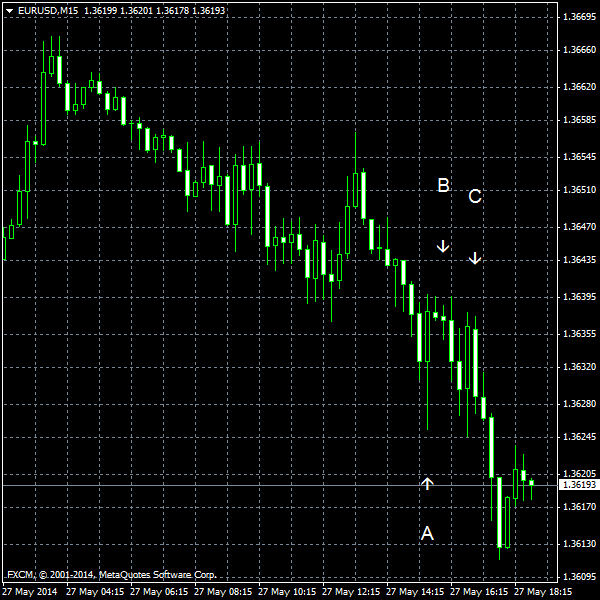