EUR/USD Rebounds as US Economy Contracts

EUR/USD gained today after two sessions of losses as US gross domestic product declined last quarter, demonstrating the first drop since 2011. As for other indicators, pending home sales continued to increase, albeit slower than was anticipated, and jobless claims fell more than was predicted.
US GDP contracted 1.0% in Q1 2014 according to the preliminary (second) estimate, while the advance (first) estimate showed 0.1% growth. The median analysts’ forecast promised 0.6% drop. The economy expanded 2.6% in Q4 2013. (Event A on the chart.)
Initial jobless claims fell from 327k to 300k last week, more than forecasters predicted (to 321k). (Event A on the chart.)
Pending home sales rose just 0.4% in June instead of 1.1% that was predicted by experts. (Event B on the chart.) Sales were up 3.4% in March. The report was rather positive despite the  result, saying:

Crude oil inventories increased by 1.7 million barrels last week and are in the upper half of the average range for this time of year. This is compared to the predicted drop by 0.1 million and the previous week’s decline by 7.2 million. Total motor gasoline inventories decreased by 1.8 million barrels and are in the middle of the average range. (Event C on the chart.) 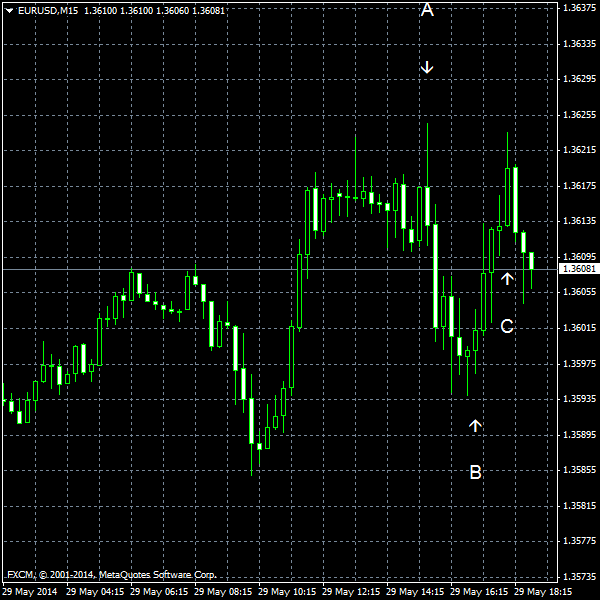