EUR/USD jumped on the last trading day of May, reversing its weekly loss and turning it into a gain. It is a surprise as European indicators were negative, while US reports were not very bad (in fact some of them were surprisingly positive). The currency pair will end this week with a small gain if it closes near the current level but it is still heading to the 1.6 percent monthly loss.
Personal income increased 0.3% in April, matching analysts’ expectations, after rising 0.5% in March. Personal spending decreased 0.1% in April. This is compared to the median forecast of a 0.2% increase and the March rise by 1.0%. (Event A on the chart.)
Chicago PMI increased to 65.5 in May from 63.0 in April, the highest since October, instead of falling to 60.8 as was predicted by market experts. (Event B on the chart.)
Michigan Sentiment Index dropped from 84.1 in April to 81.9 in May according to the revised estimate, which was little changed from the preliminary figure of 81.8. (Event C on the chart.) Specialists predicted a reading of 82.9. The report explained that the drop is not a reason to worry:

The small May loss should not detract from the fact that consumer confidence during the first five months of 2014 was higher than anytime since 2007. Data clearly indicate continued strength in consumer spending during the year ahead. 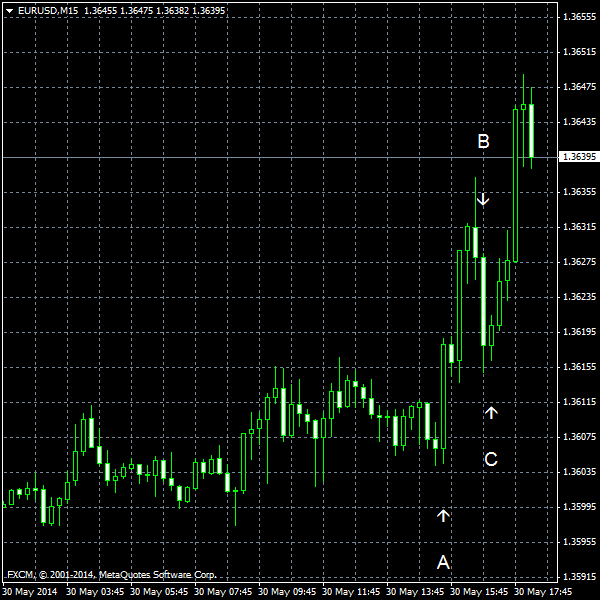