EUR/USD dropped today as the gauge of the US services sector improved last month much more that was expected. Even the disappointing employment data did not help the currency pair to gain ground. Other reports were also mixed.
ADP employment demonstrated growth by 179k in May, while analysts predicted it to be at 217k, close to the previous month’s reading of 215k. (Event A on the chart.)
Trade balance deficit widened to $47.2 billion in April up from $44.2 billion in March (revised from $40.4 billion) instead of shrinking to $40.8 billion as was predicted. (Event B on the chart.)
Nonfarm productivity fell at the 3.2% annual rate in Q1 2014, more than was predicted (2.2%) and than in Q4 2013 (1.7%). (Event B on the chart.)
ISM services PMI was at 56.3% in May. This is compared to the median forecast of 55.6% and the previous reading of 55.2%. (Event C on the chart.)
Crude oil inventories decreased by 3.4 million barrels from the previous week last week and are near the upper limit of the average range for this time of year. Analysts predicted a decrease of 0.2 million, while the week before the stockpiles expanded 1.7 million. Total motor gasoline inventories increased by 0.2 million barrels and are in the middle of the average range. (Event D on the chart.)
Yesterday, a report on factory orders was released, showing an increase by 0.7% in April, in line with forecasts, which followed growth by 1.5% in March (revised from 1.1%). (Not shown on the chart.) 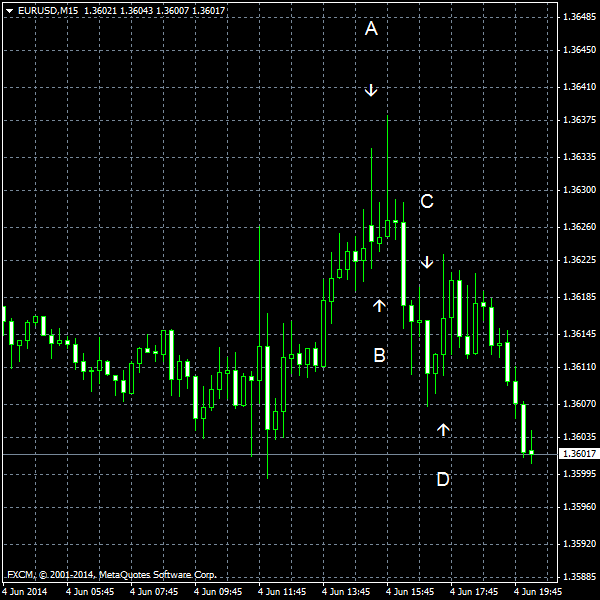