US NFP Grow in Line with Forecasts, EUR/USD Slides

EUR/USD retreated today following yesterday’s rally. US nonfarm payrolls allowed the dollar to gain on the euro, but gains were limited as the report was in line with expectations, meaning that the positive reading was already priced in. The currency pair behaved weirdly yesterday, tumbling after the European Central Bank announced additional stimulus measures but rallying later.
Nonfarm payrolls grew by 217k in May, in line with market expectations of 214k, after rising 282k in April. The unemployment rate remained at 6.3%, while analysts predicted an increase to 6.4%. (Event A on the chart.)
Consumer credit grew by $26.9 billion in April. This is compared to the predicted increase of $15.3 billion and the revised March growth by $19.5 billion ($17.5 billion before the revision). (Event B on the chart.)
Yesterday a report on unemployment claims was released, showing a reading of 312k last week, which was higher than the predicted value of 309k and the previous week’s 304k. (Not shown on the chart.) 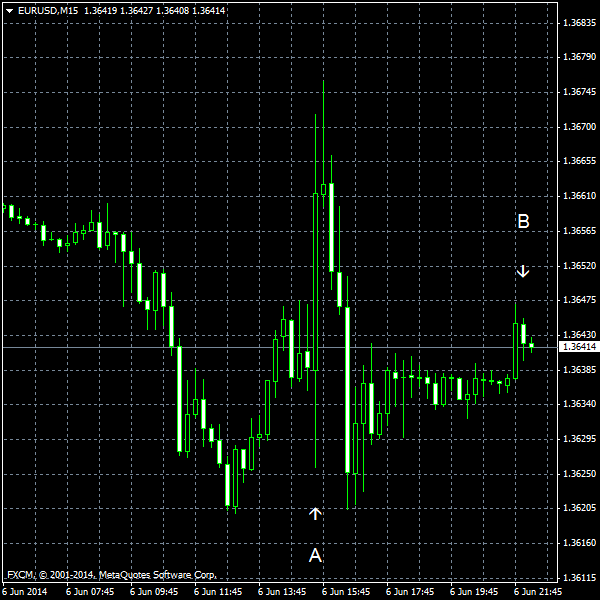