EUR/USD Trickles Down During Quiet Trading

This week is rather poor in terms of economic data from the United States, especially in the first half of the week, creating relatively quiet trading environment. Without any major news, events of the previous week continue to influence the Forex market. Most important of them, the European Central Bank policy decision and US nonfarm payrolls, were negative for EUR/USD, therefore it is not surprising to see that the currency pair continues to demonstrate weakness, falling for the fourth straight trading session.
US crude oil inventories were down 2.6 million barrels last week from the week before but remained in the upper half of the average range for this time of year. This is compared to the forecast drop of 1.3 million and the previous week’s declined by 3.4 million. Total motor gasoline inventories grew by 1.7 million barrels and are in the middle of the average range. (Event A on the chart.)
Treasury budget demonstrated a deficit of $130.0 billion in May, in line with the forecast shortage of $132.8 billion. The budget had a surplus of $106.9 in April. (Event B on the chart.)
Yesterday, a report on wholesale inventories was released, showing growth by 1.1% in April, the same rate as in May, compared to market expectations of 0.6%. (Not shown on the chart.) 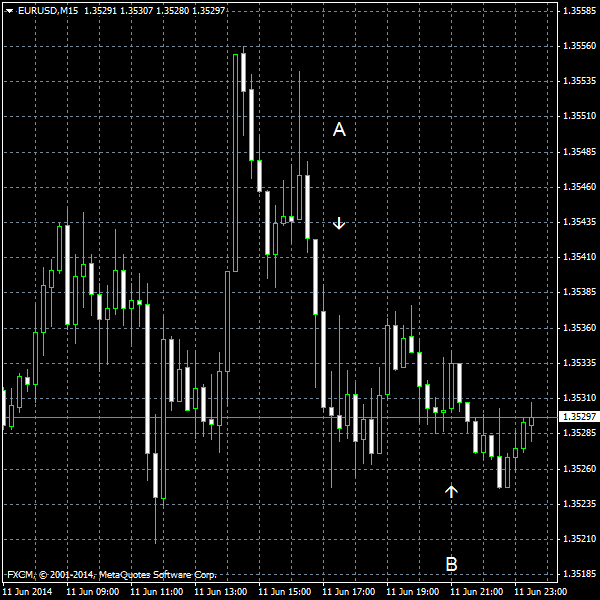