EUR/USD advanced today as the US Federal Open Market Committee lowered its growth forecasts and reiterated that interest rates will likely remain extremely low for a prolonged period of time. Such statement disappointed those dollar bulls who were hoping for monetary tightening in relatively near future. The monetary policy of the Federal Reserve remains in a longer run, but for now absence of a major shock from the US central bank encouraged some risk taking among Forex traders.
Deficit of US current account widened to $111.2 billion (preliminary) in the first quarter of 2014 from $87.3 billion (revised) in the fourth quarter of 2013. Analysts expected a smaller increase to $96.0 billion. (Event A on the chart.)
Crude oil inventories decreased by 0.6 million barrels last week, matching forecasts exactly, and are in the upper half of the average range for this time of year. The stockpiles dropped 2.6 million in the preceding week. Total motor gasoline inventories increased by 0.8 million barrels and are in the upper half of the average range. (Event B on the chart.)
FOMC reduced its monthly asset purchases by another $10 billion to $35 billion per month. Such move was expected by market participants. The Committee said in the statement:

The Committee continues to anticipate, based on its assessment of these factors, that it likely will be appropriate to maintain the current target range for the federal funds rate for a considerable time after the asset purchase program ends, especially if projected inflation continues to run below the Committee’s 2 percent goal, and provided that inflation expectations remain well anchored.

The wording made traders believe that the Federal Reserve is not going to raise interest rates soon. The economic projections reinforced such outlook as the central bank lowered its growth forecast to 2.1–2.3 percent for this year from 2.8–3.0 percent in the March projections. The forecast for the next year remained unchanged at 3.0–3.2 percent. (Event C on the chart.) 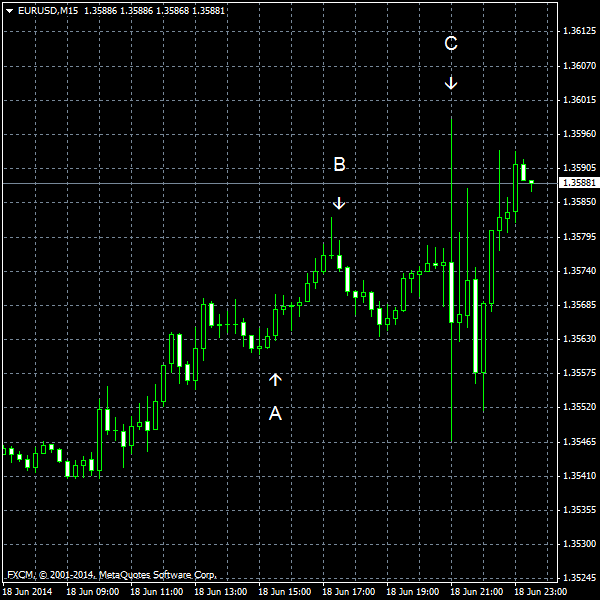