Rally of EUR/USD Fails due to US Sentiment & Housing Data

EUR/USD attempted to rally today, ignoring the disappointing report about German business climate (event A on the chart), but the rally failed after the release of  data about US consumer confidence and new home sales. Most other reports from the United States were good as well, though not all of them.
S&P/ home price index rose 10.8% in April from a year ago. The reading was far below the forecast of 11.7% and the previous month’s increase of 12.4%. The index was up 1.15% . (Event B on the chart.)
Richmond Fed manufacturing index demonstrated a noticeable drop from 7 in May to 3 in June instead of just a small decline to 6 that was predicted by analysts. (Event C on the chart.)
Consumer confidence jumped to 85.2 in June up from 82.2 in May, beating market expectations of 83.6. (Event C on the chart.)
New home sales were at the seasonally adjusted annual rate of 504k, up from the revised April rate of 425k. The actual figure was far above the predicted 442k. (Event C on the chart.)
Yesterday, a report on existing home sales was released, showing an increase to the seasonally adjusted annual rate of 4.89 million in May from the  4.66 million in April, which was bigger than the predicted rise to 4.74 million. (Not shown on the chart.) 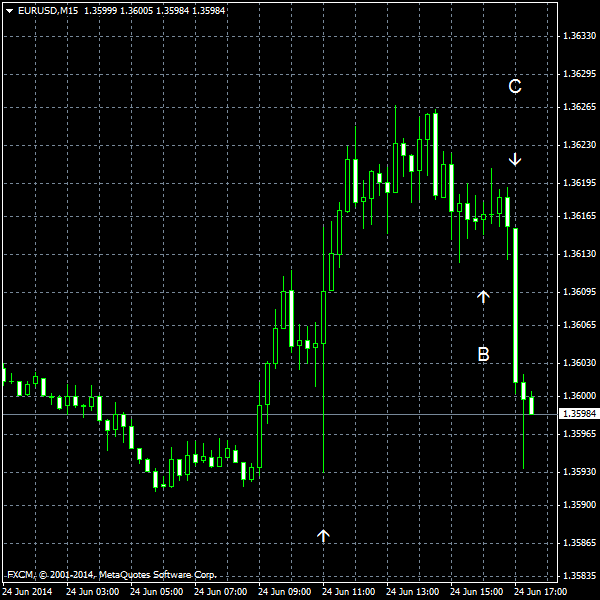