EUR/USD surged today on the back of poor US data, most notably the significant downward revision of US gross domestic project. Even risk aversion, which prevails on the Forex market, was not able to keep the currency pair down. As of now, the pair halted its upward movement but holds onto gains.
US GDP decreased at the annual rate of 2.9% in Q1 2014 after rising 2.6 percent in Q4 2013 according to the third (final) estimate. The reading was far worse than the previous estimate of -1.0% and the analysts forecast of a -1.8% change. (Event A on the chart.)
Durable goods orders demonstrated decrease of 1.0% in May, which was far bigger than the predicted drop of 0.1%. Moreover, the April increase was revised down from 0.8% to 0.6%. (Event A on the chart.)
Crude oil inventories increased by 1.7 million barrels last week and are in the upper half of the average range for this time of year. It was expected that stockpiles, which were down 0.6 million in the week before, would drop 1.2 million. Total motor gasoline inventories increased by 0.7 million barrels and are in the middle of the average range. (Event B on the chart.) 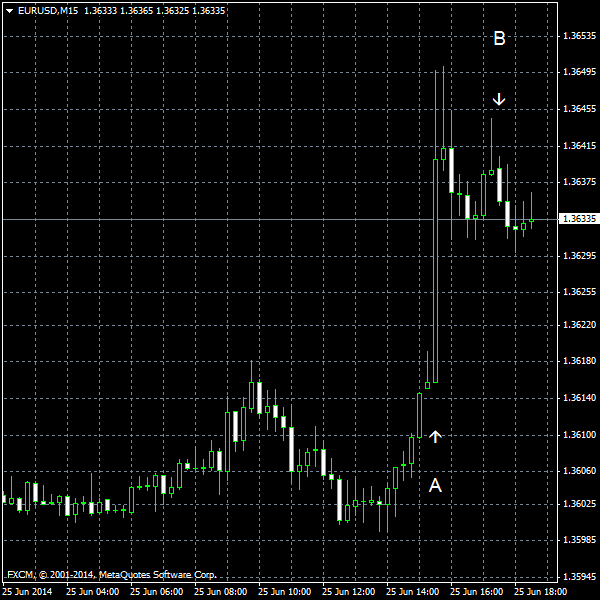