EUR/USD attempted to rally after the Federal Open Market Committee released minutes of its October meeting. The rally turned out to be false as the currency pair retreated to the opening level very quickly.
Housing starts were at the seasonally adjusted annual rate of 1.01 million in October, a little below the September’s value of 1.04 million. Analysts expected the indicator to stay little changed. Building permits were at the seasonally adjusted annual rate of 1.08 million last month, above the forecast and the previous month’s reading of 1.03 million. (Event A on the chart.)
Crude oil inventories increased by 2.6 million barrels last week are in the upper half of the average range for this time of year. This is compared to the forecast drop by 0.7 million and the previous week’s decline of 1.7 million. Total motor gasoline inventories increased by 1.0 million barrels and are in the middle of the average range. (Event B on the chart.)
FOMC minutes of its latest policy meeting were considered less hawkish than the statement. The minutes mentioned that policy makers were worried about inflation:

Most participants anticipated that inflation was likely to edge lower in the near term, reflecting the decline in oil and other commodity prices and lower import prices.

Some FOMC members argued in favor of eliminating language in the statement that indicates a “considerable time” before an interest rate hike. Others preferred to keep the wording, adding clarification that any changes to monetary policy will be . (Event C on the chart.) 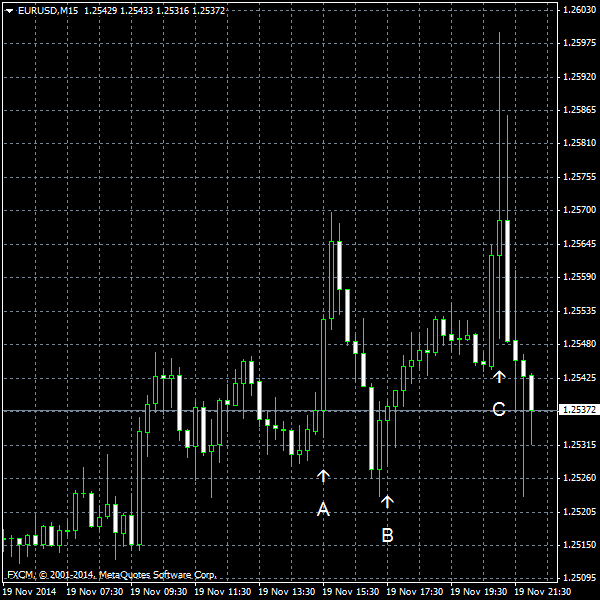