EUR/USD was down today, but the drop was small as movement of the currency pair was contained in a tight range. The euro held ground against the dollar even though economic data from the United States was good for the most part while PMI figures from Europe were weaker than market participants have anticipated.
US CPI was unchanged in October after rising 0.1% in September. Experts predicted 0.1% decline. (Event A on the chart.)
Initial jobless claims were at the seasonally adjusted rate of 291k last week, just a small decrease from the previous week’s 293k. Analysts promised much bigger increase to 286k. (Event A on the chart.)
Philadelphia Fed manufacturing index jumped from 20.7 in October to 40.8 in November instead of falling to 18.9 as was forecast by experts. It was the highest reading since December 1993. (Event B on the chart.)
Existing home sales rose to the seasonally adjusted annual rate of 5.26 million in October from 5.18 million in September. Economists anticipated a small decrease to 5.16 million. (Event B on the chart.)
Leading indicators increased 0.9% in October, following the 0.7 percent increase in September. The median forecast promised a 0.6% increase. (Event B on the chart.) 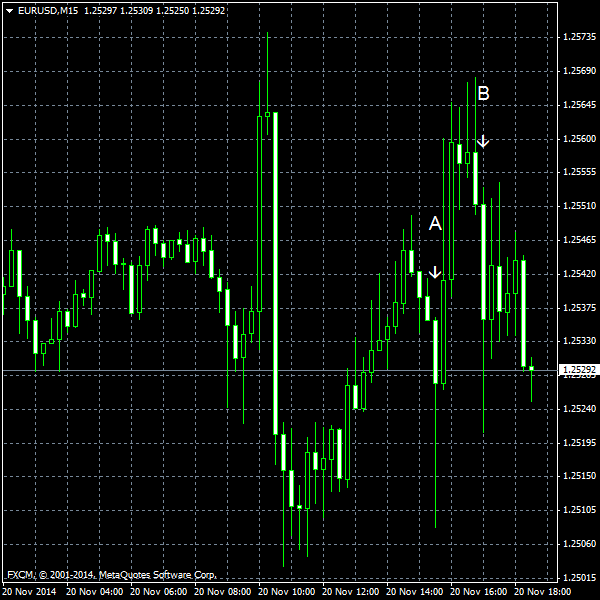