Dollar Retreats After Wave of Reports

The current trading session is awashed with economic reports from the United States, and most of them were disappointing, the same as yesterday. The dollar retreated further as a result, falling for the third consecutive day.
Initial jobless claims climbed from 292k to 313k last week instead of falling to 287k as market analysts were anticipating. (Event A on the chart.)
Durable goods orders rose by 0.4% in October while experts predicted a drop by the same rate. The September’s change was revised positively from -1.3% to -1.1%. (Event A on the chart.)
Both personal income and spending rose by 0.2% in October, trailing the median analysts’ estimate of 0.4%. Income was up at the same 0.2% rate in September, while the reading for expenditures was revised from -0.2% to 0.0%. (Event A on the chart.)
Chicago PMI fell from 66.2 in October to 60.8 in November, below market expectations of 63.1. (Event B on the chart.)
Revised Michigan Sentiment Index was at 88.8 in November. While the reading was above the October’s figure of 86.9, it missed the consensus economists’ projection of 90.2 and trailed the preliminary estimate of 89.4. (Event C on the chart.)
New home sales were at the seasonally adjusted annual rate of 458k in October, just a little bit above the September’s level of 455k (revised negatively from 467k). Specialists promised an increase to 471k. (Event C on the chart.)
Pending home sales dropped 1.1% in October, frustrating analysts who have expected a 0.9% increase. The September change got a positive revision of 0.3% to 0.6%. (Event C on the chart.)
Crude oil inventories increased by 1.9 million barrels last week and are in the upper half of the average range for this time of year. The actual growth was bigger than the predicted 0.4 million but smaller than the previous week’s 2.6 million. Total motor gasoline inventories increased by 1.8 million barrels but are in the lower half of the average range. (Event D on the chart.) 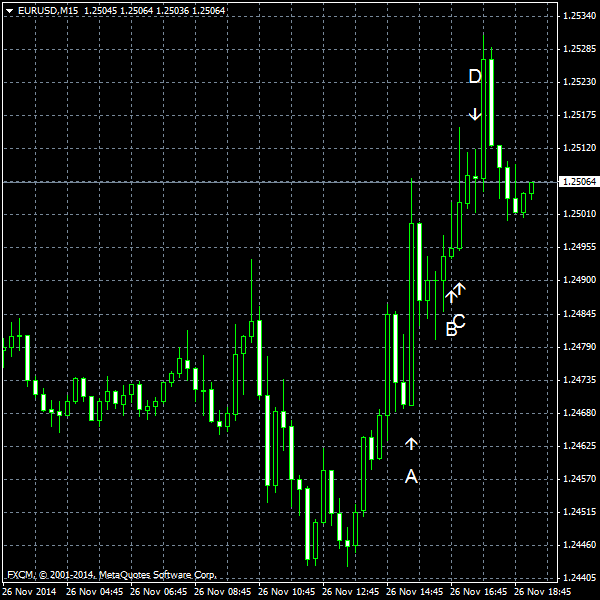