2014 Trading Results — Was Forex Market Profitable for You?

Although 2014 was not a big success in terms of Forex trading for my main account, which I use for chart pattern trading, it was not a bad one either. With 4.6% profit, it stands worse than my 2012 result of 26.7% gain, but much better than 2013’s 8.8% yearly loss.
This year’s profit is mostly attributed to my last two successful trades. It also includes a profitable CHF/JPY trade that was entered in September of 2013 but was exited in July of 2014. There were only 11 chart pattern trades in 2014: 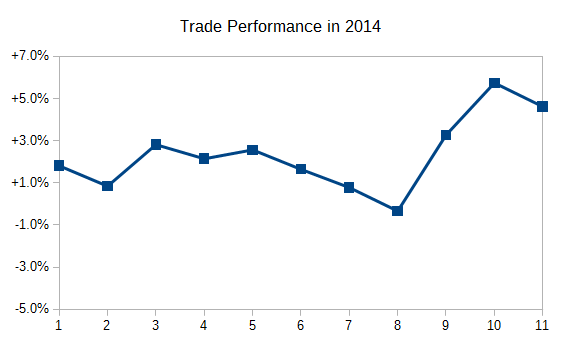 I have managed to close all my open trades before the end of the year and there were also no pending orders waiting to be triggered as of December 31, so the chart above is a clear representation of the 2014 results of my trading account used for chart pattern trading.
Apart from my regularly reported chart pattern trades, I had two big trades closed on my two other accounts this year. The first one was a rather successful EUR/CHF carry trade. The second one was a hedging trade on USD/RUB pair running from October through ; it has brought me about 40% profit on its dedicated account. I do not count these two trades in my yearly result because they were opened on separate accounts. Besides, the EUR/CHF trade was too too count it for some particular year, while the USD/RUB trade was more of a hedge than a  opportunity.

If you want to share some more information about your Forex trading performance in 2014, please feel free to do so using the commentary form below.