The dollar was strong today with the help of positive macroeconomic data and the hawkish minutes of the December policy meeting of the Federal Reserve. EUR/USD dropped to yet another low.
ADP employment grew by 241k in December while analysts predicted the same rate of growth as the revised November’s 227k. (Event A on the chart.)
Trade balance showed a deficit of $39.0 billion in November even though experts anticipated it to stay at the revised October’s level of $42.2 billion. (Event B on the chart.)
Crude oil inventories decreased by 3.1 million barrels last week, following the 1.8 million drop the week before, and are well above the upper limit of the average range for this time of year. The actual reading was nowhere near the forecast increase by 0.9 million. Total motor gasoline inventories increased by 8.1 million barrels. (Event C on the chart.)
FOMC minutes maintained the hawkish bias of the policy statement released in December. (Event D on the chart.) Additionally, FOMC predicted that the dollar will continue to rise, but negative impact of the currency’s strength on the economy should be limited:

Although the projected path of the dollar was revised up, the staff revised down its estimate of how much the appreciation of the dollar since last summer would restrain projected growth in real GDP. 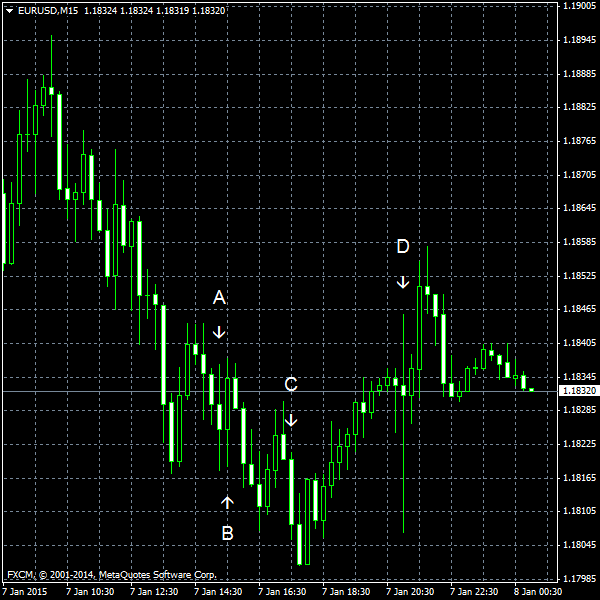