The US dollar continued to grow against the euro following a huge wave of FX volatility generated by SNB’s cancellation of EUR/CHF floor (Event A on the chart.) EUR/USD went down to 1.1565 during that turbulence period but then recovered. The currency pair continued to decline following good fundamental reports from the United States. Even poor initial jobless claims report could not stop the euro from falling.
Initial jobless claims rose from 297k to 316k last week. Traders expected a decline to 290k. (Event B on the chart.)
NY Empire State manufacturing index increased to 10 in January. At the same time, December’s value has been upwardly revised from -3.6 to -1.2. Market participants expected a growth to 5. (Event B on the chart.)
Producer Price Index demonstrated deflation of 0.3% in December. It was worse than November’s 0.2%, but better than forecasted 0.4% deflation. (Event B on the chart.)
Philadelphia Fed manufacturing index slumped from 24.3 to 6.3 in January. Median forecast value was pointing at a much slower decline to 19.1. (Event C on the chart.) 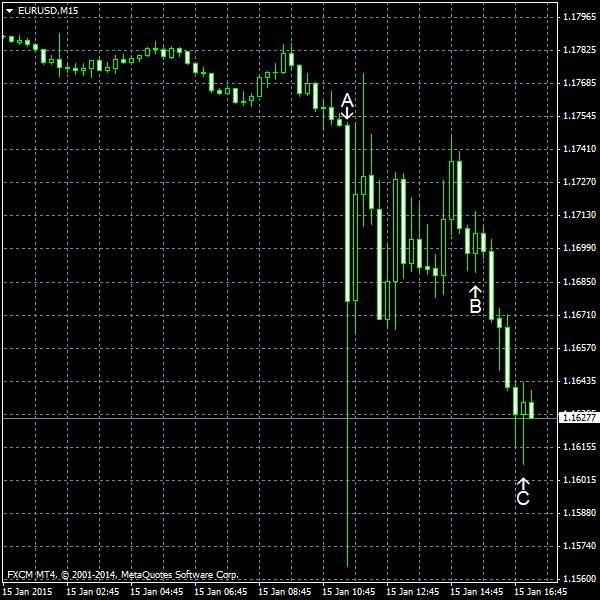