EUR/USD Pushed Down by Poor US Fundamentals

EUR/USD was falling during almost whole trading session today. It reacted negatively both to positive and negative US data reports. It entered a significant correction wave after setting a new low at 1.1459. Nevertheless, the currency pair was clearly in a downtrend today.
US CPI fell by 0.4% in December after declining by 0.3% in November. Such deflation has been expected by the markets. (Event A on the chart.)
Both industrial production and capacity utilization decreased in December. The former lost 0.1% (as expected) after gaining 1.3% a month earlier. The latter fell from 80.0% to 79.7%. Traders expected capacity utilization to decline to 79.9%. (Event B on the chart.)
University of Michigan Confidence Index unexpectedly rose from 93.6 to 98.2 in a preliminary January report. Only a slight increase to 94.1 has been forecasted by the analysts. (Event C on the chart.)
Net foreign purchases were at $33.5 billion in November. The number was better than the estimated value of $27.3 billion and significantly above the October’s net result of -$1.4 billion. (Event D on the chart.) 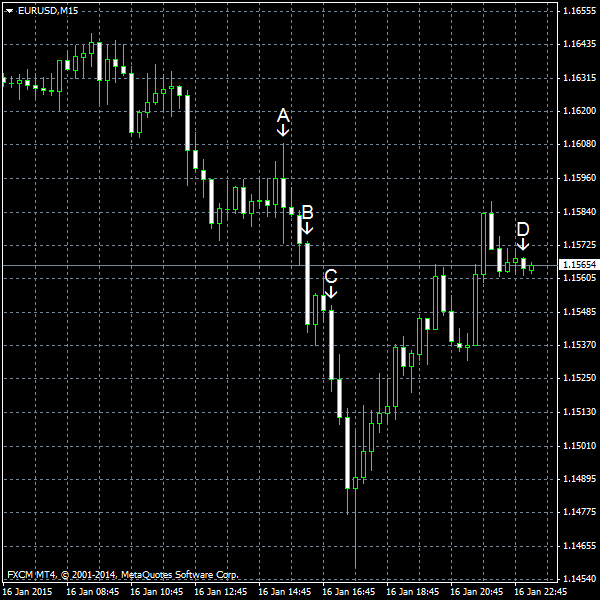