EUR/USD Weakest Since 2003 After ECB

Data from the United States was rather mixed both yesterday and today but it was not the main driver for the Forex market during the current trading session. The major event today was the monetary policy announcement from the European Central Bank. The ECB unveiled its expanded asset purchase plan, driving the euro down. (Event A on the chart.) While the drop of EUR/USD was not big at first, the currency pair quickly accelerated its drop, reaching the lowest level since November 2003.
Initial jobless claims fell from 317k to the seasonally adjusted rate of 307k last week but were still above the forecast figure of 301k. (Event A on the chart.)
US crude oil inventories increased by 10.1 million barrels last week. The actual increase was far above the forecast of 2.5 million and the previous week’s gain of 5.4 million. The stockpiles were at the highest level for this time of year in at least the last 80 years. Total motor gasoline inventories increased by 0.6 million barrels and are well above the upper limit of the average range. (Event B on the chart.)
Yesterday, a report on housing starts and building permits was released. The data was mixed as housing starts rose to the seasonally adjusted annual rate of 1.09 million in December from November’s 1.04 million, but building permit fell to 1.03 million last month from the previous month’s 1.05 million. Analysts’ estimates were at 1.04 million and 1.06 million respectively. (Not shown on the chart.) 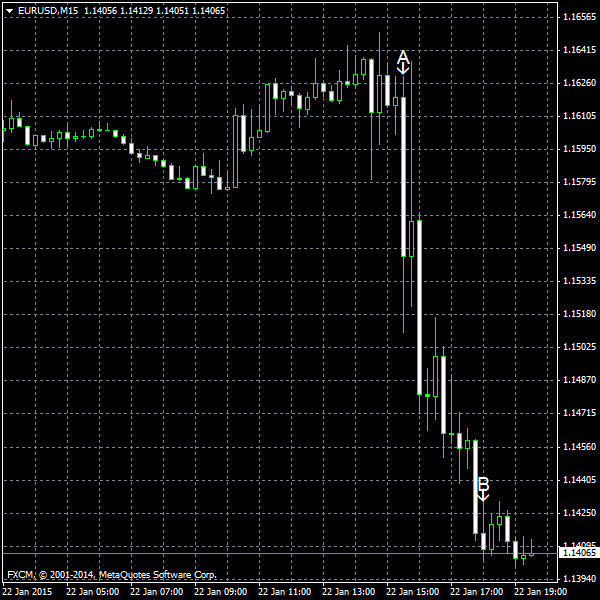