My last carry trade did end quite well for me, though the Swiss National Bank has done a lot to end it poorly for other traders. Looking at the mayhem that ensued following the EUR/CHF floor removal, I thought that it would probably be a good idea to use the situation to my favor and to enter some new carry trade opportunity.
It did not take me long to get focused on this currency pair — NZD/CHF. As of now, we have positive 3.50% interest rate associated with holding long New Zealand dollar. At the same time, there is -0.75% average interest on Swiss francs. Going long on NZD/CHF should be giving about 4.25% annual interest. With 1:100 leverage, that becomes a very promising number. Besides, NZD/CHF has dropped a lot during the franc’s rapid appreciation on January 15 — it is about time for the currency pair to recover some of its losses. So, here is my list of reasons for the long position in NZD/CHF:

The one problem I see with this trade is that the Swiss franc is still significantly oversold by the retail FX traders according to sentiment indicators. Retail positions are a poor crowd to follow in currency trading. However, I believe that it is not that big of a problem, considering how only a small fraction of retail traders has positions in CHF (e.g. less than 6% of all positions at OANDA are in CHF pairs). So, considering the positive factors, I choose to ignore this negative one. Of course, it does not mean that you have to do the same.
You can see my long position on the screenshot of the chart below. I have placed my  at 0.64400. I have also placed a  — at 0.80000, but I am not expecting NZD/CHF to move there. I have put it to catch a possible spike up. Actually, I am going to exit based on the fundamental signals from the Reserve Bank of New Zealand and Swiss National Bank. The planned horizon for this trade is between 1 and 3 years. That is if it does not hit tomorrow :-). 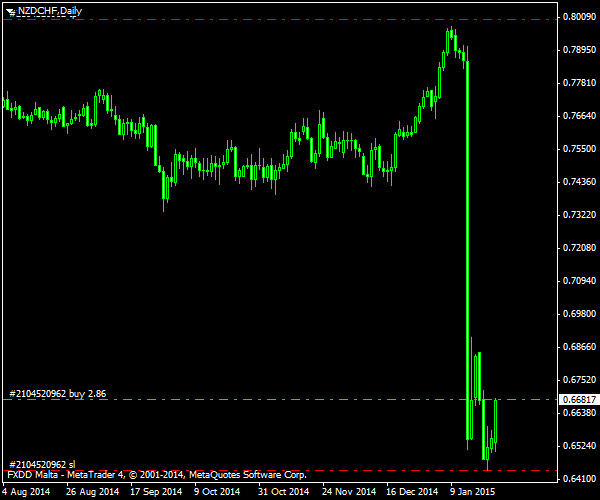 Update 2015-06-17: The trade has ended today as the currency pair dipped farther down following a disastrous decision by the Reserve Bank of New Zealand to lower the official cash rate from 3.50% to 3.25% on June 11. It proved to be detrimental to this carry trade position — its has been hit. Thanks to the positive swap return that was gathered during the 5 months of the trade’s lifetime, my loss was only two thirds of the original risk. Still, I feel rather disappointed with such a turn of events considering how well the things were going for NZD/CHF during the first two months: 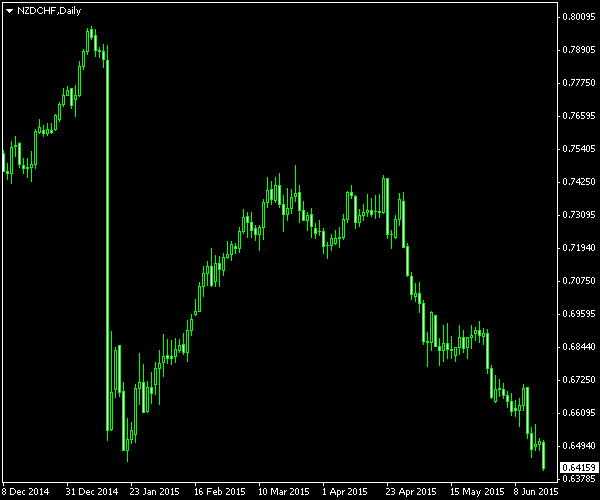 If you have any questions about this carry trade opportunity or if you wish to offer your ideas for for carry trade strategy in the current Forex market situation, please feel free to post them using the form below.