EUR/USD Rises on Back of Dollar Weakness

EUR/USD advanced today, driven by the weakness of the US dollar. The greenback was soft for several reasons, the most important of them being the surge of unemployment claims and the  agreement between Ukraine and  rebels, which made the dollar less attractive in its role of a safe haven. As for news from Europe, they were not particularly good as talks about a new bailout deal for Greece did not bear fruit for now.
Retail sales fell 0.8% in January, two times the predicted drop of 0.4%. Still, the decline was a bit smaller than the previous month’s 0.9%. (Event A on the chart.)
Initial jobless claims increased to 304k (seasonally adjusted) last week from the previous week’s revised 279k. The actual figure was above the median forecast of 282k. (Event A on the chart.)
Business inventories were up 0.1% December while analysts expected an increase by 0.2%, the same as in November. (Event B on the chart.)
On Tuesday, a report on wholesale sales was released, showing an increase by 0.1% in December, which was smaller than market expectations (0.2%) and the previous month’s growth (0.8%). (Not shown on the chart.)
Yesterday, a report on crude oil inventories was released, showing an increase by 4.9 billion barrels to yet another record last week. The growth was bigger than the predicted 3.7 million but smaller than the previous week’s 6.3 million. Total motor gasoline inventories increased by 2.0 million barrels and are above the upper limit of the average range. (Not shown on the chart.)
Treasury budget deficit was $17.5 billion in January — a much bigger value than the predicted $2.6 billion. The budget gap was at -$1.9 billion in December ($1.9 billion surplus). (Not shown on the chart.) 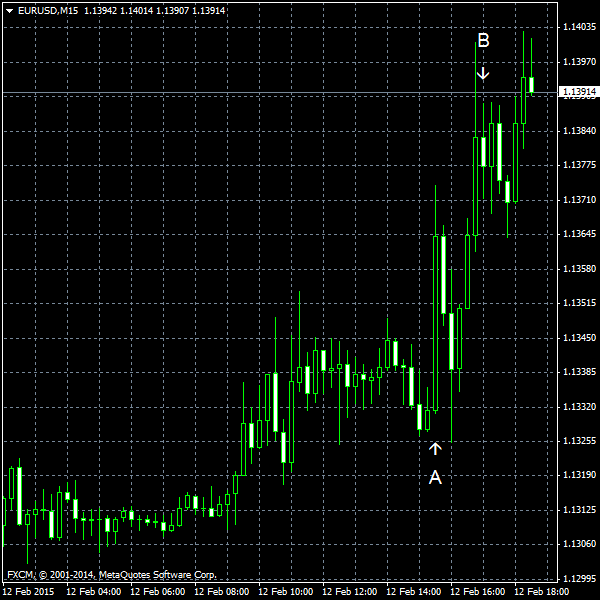