EUR/USD Drops After German Data, Trims Losses After US Report

EUR/USD tumbled today after the German business climate report came out worse than market participants have anticipated. (Event A on the chart.) The currency pair touched the low of 1.1295 intraday but bounced to 1.1350 later as US housing data was not impressive as well.
Existing home sales fell to the seasonally adjusted annual rate of 4.82 million in January (lowest since April) from the  5.07 million in December, trailing market expectations of 5.03 million. (Event B on the chart.)
On Thursday (February 19) several reports were released.
Initial jobless claims fell from 304k to 283k in the week ending February 14. Analysts anticipated a drop to 293k. (Not shown on the chart.)
Philadelphia Fed manufacturing index dropped from 6.3 to 5.2 in February instead of rising to 8.8 as was predicted by experts. (Not shown on the chart.)
Leading indicators increased 0.2% in January while specialists promised an increase by the December’s revised rate of 0.4%. (Not shown on the chart.)
US crude oil inventories increased by 7.7 million barrels last week, reaching a new record, after growing 4.9 million in the previous week. The data frustrated analysts who counted on a 1.8 million drop. Total motor gasoline inventories increased by 0.5 million barrels and are above the upper limit of the average range. (Not shown on the chart.) 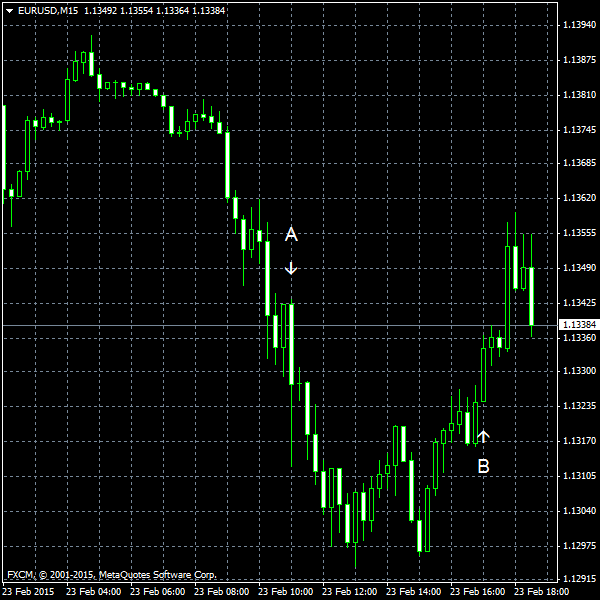