It looks like EUR/USD has left the recovery mode as the currency pair dropped today, erasing gains of the two previous trading sessions. The major reason for the drop was the stalemate in talks between Greece and its creditors. The deadline for repayment of the Greek debt is nearing, and with it chances for the indebted country to exit the eurozone increase. While some experts argue that such an outcome may be positive for the euro in the long run, for now the situation hurts the shared eurozone currency.
Personal income rose 0.4% in April, following no change in March and exceeding the forecast 0.3% by a small margin. Personal spending, on the other hand, was almost unchanged last month despite the forecasts of a 0.2% growth. Spending increased 0.5% in March. (Event A on the chart.)
Markit manufacturing PMI slipped a little in May according to the final estimate, falling to 54.0 this month from 54.1 in April. The reading was in line with expectations and slightly above the flash estimate of 53.8. (Event B on the chart.)
As for ISM manufacturing PMI, it was at 52.8% in May, exceeding both the previous month’s reading of 51.5% and the median forecast of 51.9%. (Event C on the chart.)
Construction spending increased 2.2% in April from March, far more than analysts had expected — 0.7%. Moreover, the March reading got a substantial upward revision from -0.6% to the positive figure of 0.5%. (Event C on the chart.) 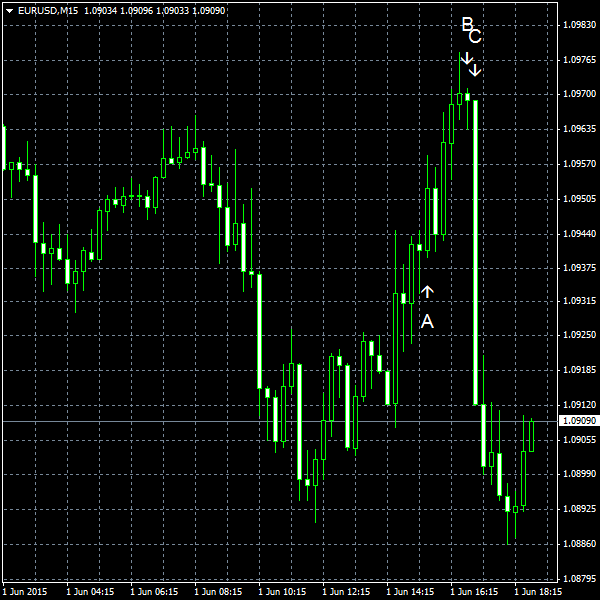