The dollar fell against the euro on Monday as US macroeconomic reports were surprisingly lackluster for the most part. EUR/USD remained under pressure, though, after the weekend talks between Greece and its creditors turned out to be an utter failure and the indebted country is closer to a default than ever.
NY Empire State Index sank from 3.1 in May to -2.0 in June. It was a huge (and unpleasant) surprise for traders who had expected the gauge to rise to 5.8. (Event A on the chart.)
Industrial production and capacity utilization contracted in May. Production was down 0.2% instead of rising at the same rate as was predicted by analysts. The previous month’s change was revised negatively from -0.3% to -0.5%. Capacity utilization rate edged down to 78.1% while experts predicted it to stay unchanged at 78.3%. (Event B on the chart.)
Net foreign purchases were at $53.9 billion in April. That was a better reading than the forecast $22.5 billion. The March’s figure received a substantial positive revision from $17.6 billion to $25.6 billion. 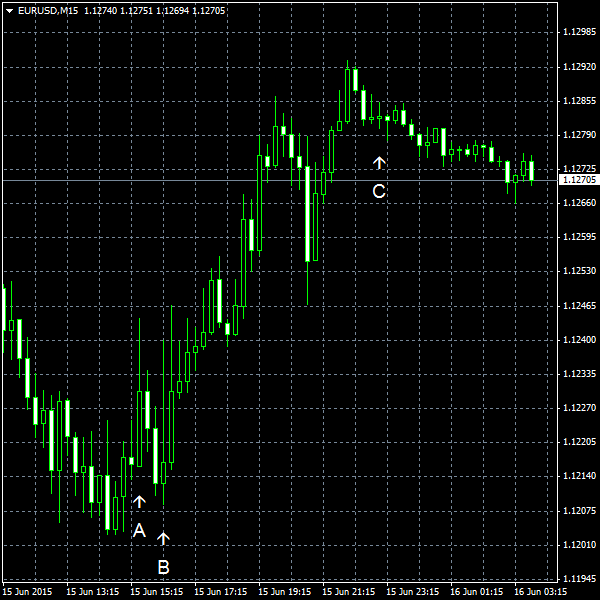