EUR/USD has been trading basically sideways for the most part of the Wednesday’s trading session but broke to the upside after the Federal Reserve had concluded its policy meeting. Market participants perceived the Fed’s statement to be dovish, resulting in a drop of the dollar against other currencies, including the euro.
US crude oil inventories decreased by 2.7 million barrels last week following the huge drop by 6.8 billion the week before but remained near the record level for this time of the year. Analysts had expected a smaller decrease by 1.3 million. Total motor gasoline inventories increased by 0.5 million barrels last week, and are in the upper half of the average range. (Event A on the chart.)
FOMC released a statement of its monetary policy decision today. (Event B on the chart.) As was expected, the Committee did not change the policy. Overall, the statement was considered dovish by markets. It looks like US policy makers are not convinced that the US economic growth is stable enough to start monetary tightening:

The Committee anticipates that it will be appropriate to raise the target range for the federal funds rate when it has seen further improvement in the labor market and is reasonably confident that inflation will move back to its 2 percent objective over the medium term.

The statement also suggested that the FOMC will not hurry with raising interest rates:

The Committee currently anticipates that, even after employment and inflation are near levels, economic conditions may, for some time, warrant keeping the target federal funds rate below levels the Committee views as normal in the longer run. 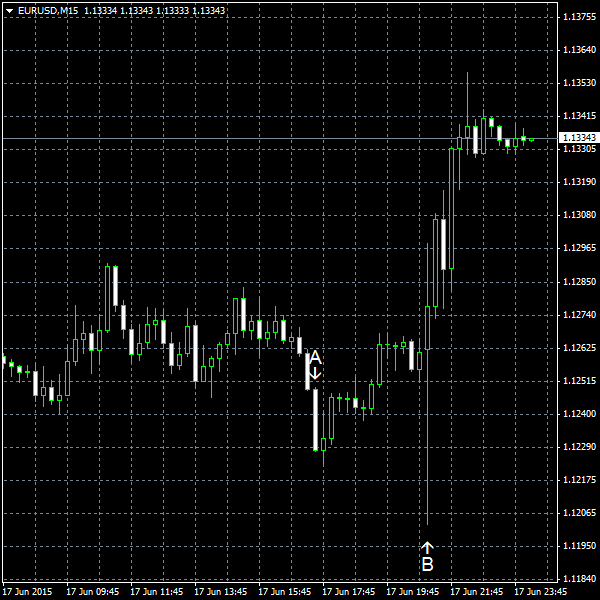