EUR/USD rallied today, extending yesterday’s gains. The dollar remained under pressure from the FOMC dovish statement while the euro was supported by rumors about extension of the bailout program for Greece. The currency pair was rising during the first half of the trading session but is struggling to maintain its upward momentum as of now.
CPI rose 0.4% in May, missing the analysts’ estimate of 0.5% by a small margin but exceeding the previous month’s increase of 0.1%. (Event A on the chart.)
Initial jobless claims fell from 279k to 267k last week while analysts expected them to stay almost unchanged. (Event A on the chart.)
Current account deficit widened to $113.3 billion in Q1 2015 from $103.1 billion in Q4 2014. The median forecast promised a shortage of $116 billion. (Event A on the chart.)
Philadelphia Fed manufacturing index was at 15.2 in June, far above the median forecast of 8.1 and the May level of 6.7. (Event B on the chart.)
Leading indicators rose 0.7% in May, at the same rate as in April. Economists expected slower growth by 0.4%. (Event B on the chart.) 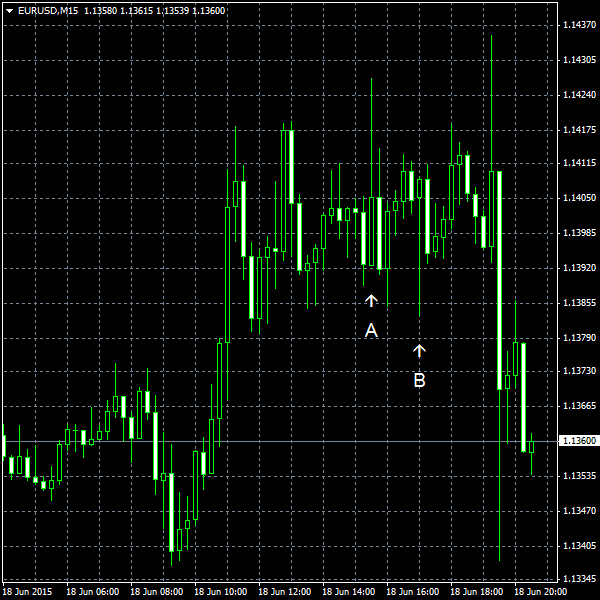