The dollar surged against the euro today even though economic reports from the United States were mixed while data about manufacturing and services sectors of the eurozone was rather positive. The reason for the euro’s underperformance was the debt crisis in Greece and the resulting risk aversion among investors. Negotiations about a bailout for the indebted country ended without result on Monday, though there were reports that steps towards a conclusive deal have been made.
Durable goods orders fell 1.8% in May, three times the forecast drop of 0.6%. The previous month’s reading was revised negatively from 0.5% to -0.2%. (Event A on the chart.)
According to the flash Markit manufacturing PMI, the index fell from 54.0 in May to 53.4 in June, reaching the lowest level since October 2013. The actual figure was nowhere near the forecast of 54.2. (Event B on the chart.)
Richmond Fed manufacturing index rose from 1 in May to 6 in June, beating the analysts’ estimate by two times. (Event C on the chart.)
New home sales were at the seasonally adjusted annual rate of 546k in May, exceeding the median specialists’ projection of 524k. The April’s value was revised from 517k up to 534k. (Event C on the chart.)
Yesterday, a report on existing home sales was released, showing an increase to the seasonally adjusted annual rate of 5.35 million in May from the upwardly revised 5.09 million in April. The actual indicator was a bit better than economists’ predictions of 5.27 million. (Not shown on the chart.) 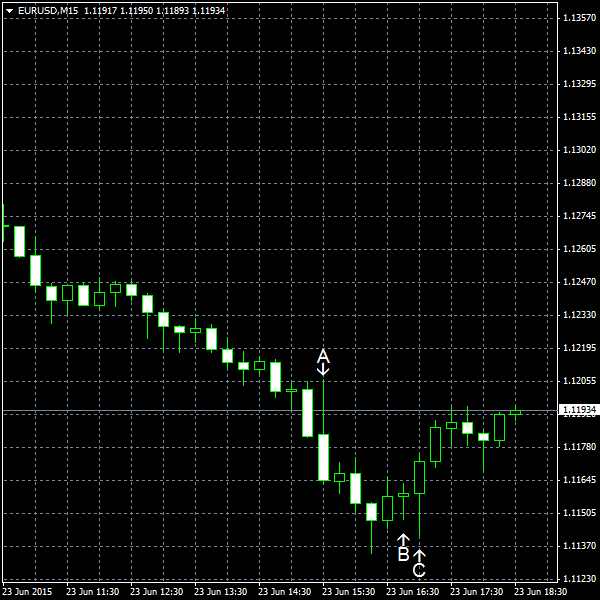