The market sentiment stabilized a bit following the recent turmoil on the Forex market caused by concerns about slowing global growth. The euro fell against the dollar as a result even though all today’s US economic reports were poor. The euro were acting like a safe currency lately, making the calm on the market detrimental to its performance.
ADP employment rose 190k in August. The figure was not as good as economists had hoped for (204k) but above the previous month’s revised value of 177k. (Event A on the chart.)
Nonfarm productivity grew 3.3% in Q2 2015, exceeding the median forecast of 2.9% and the growth of 1.3% in the previous three months. (Event B on the chart.)
Factory orders demonstrated growth of 0.4% in July, which was two times slower than 0.8% promised by analysts. The June’s increase was revised from 1.8% to 2.2%. (Event C on the chart.)
Crude oil inventories increased by 4.7 million barrels last week, staying near the highest level on a record for this time of year. Forecasters were totally wrong, promising a decrease by 0.7 million. Total motor gasoline inventories fell by 0.3 million barrels. (Event D on the chart.) 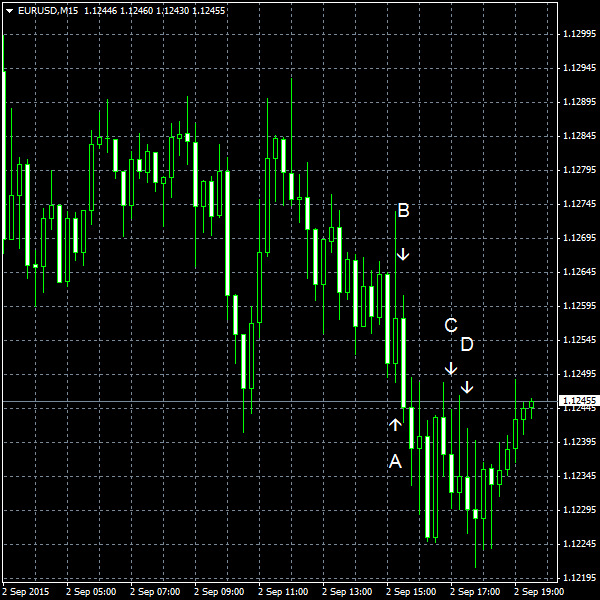