EUR/USD dropped sharply today after comments of Mario Draghi, President of the European Central Bank. (Event A on the chart.) He lowered economic forecasts, particularly the important inflation one, and suggested that additional quantitative easing is possible. Meanwhile, economic data released from the United States for the most part was better than expected, adding further pressure on the currency pair.
Trade balance deficit shrank to $41.9 billion in July down from $45.2 billion in June (revised from $43.8 billion). Forecasts were pointing at $43.2 billion as a possible value. (Event A on the chart.)
Seasonally adjusted initial jobless claims rose from 270k to 282k last week, above the predicted level of 273k. (Event A on the chart.)
Final Markit services PMI was up from 55.7 in July to 56.1 in August while analysts had expected it to stay the same as the preliminary reading of 55.2. The actual figure was the highest since May. (Event B on the chart.)
ISM services PMI was at 59.0% in August. While it was a drop from the July’s 60.3%, the reading was still better that 58.3% predicted by experts. (Event C on the chart.) 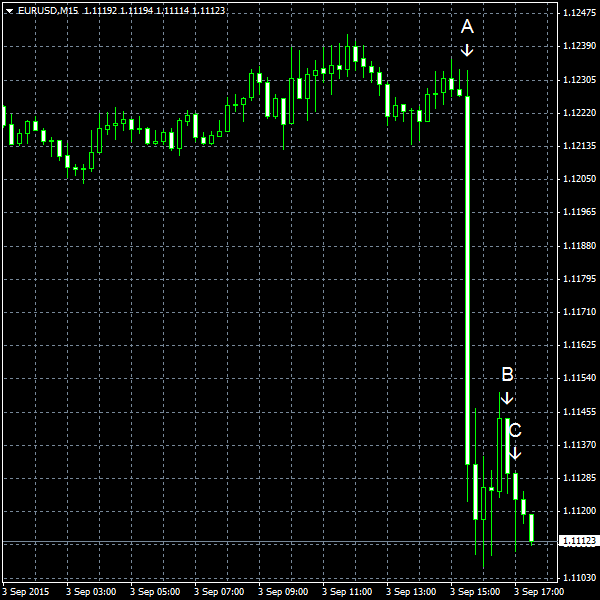