EUR/USD, which was slowly crawling up during this week, logged noticeable gains today as US macroeconomic data turned out to be mixed. It fueled speculations that the Federal Reserve is not going to raise interest rates during the next week’s policy meeting.
Initial jobless claims were at the seasonally adjusted level of 275k last week. It was below the forecast of 279k and the previous week’s revised rate of 281k. (Event A on the chart.)
Import and export prices fell in August. Prices for imports dropped 1.8%, in line with expectations, after declining 0.9% in July. Prices for exports inched down 1.4% following the revised 0.4% drop the month before. (Event A on the chart.)
Wholesale inventories dropped 0.1% in July instead of rising 0.2% as was predicted by analysts. The June’s increase was revised from 0.9% down to 0.7%. (Event B on the chart.)
US crude oil inventories increased by 2.6 million barrels last week. That is compared to the median forecast of 0.9 million and the previous week’s increase by 4.7 million. The stockpiles remained near levels not seen for this time of year in at least the last 80 years. Total motor gasoline inventories rose by 0.4 million barrels and were in the middle of the average range. (Event C on the chart.)
On Tuesday (September 8), a report on consumer credit was released, showing an increase of $19.1 billion in July. The gain was smaller than June’s revised $27.0 billion ($20.7 billion before the revision) but bigger than the predicted advance of $18.4 billion. (Not shown on the chart.) 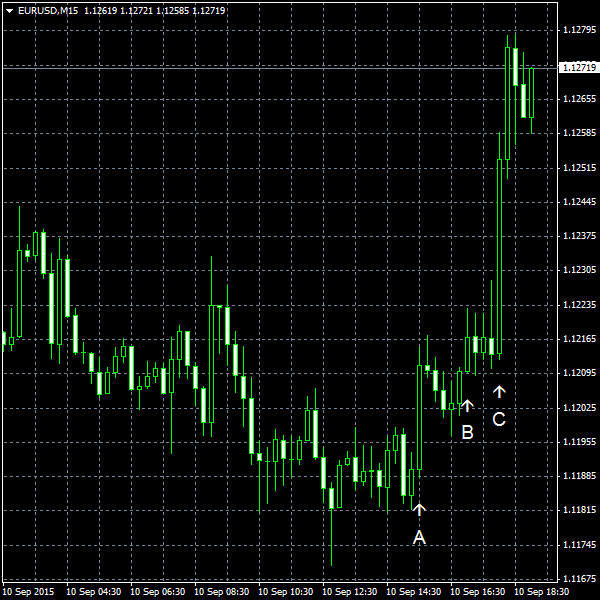