EUR/USD fell today for the second trading session as traders prepared for the announcement of a monetary policy decision by the Federal Open Market Committee on Thursday. The currency pair was moving down even though all of Tuesday’s economic reports from the United States were disappointing for dollar bulls.
Retail sales rose 0.2% in August. That is compared to the median forecast of 0.3% and the revised July’s increase of 0.7%. (Event A on the chart.)
NY Empire State Index registered a reading of -14.7 in September that was basically similar to the August’s figure of -14.9. Forecasters had been too optimistic, promising an improvement of the indicator to -0.5. (Event A on the chart.)
Both industrial production and capacity utilization declined in August. Production was down 0.4% compared to the forecast drop by 0.1% and the increase by 0.9% (revised from 0.6%) in July. Capacity utilization rate went down from 78.0% to 77.6% while experts had predicted the indicator to stay almost the same. (Event B on the chart.)
Business inventories were up 0.1% in July from the preceding month instead of falling by 0.2% as had been predicted by specialists. The inventories grew 0.7% (revised) in June. (Event C on the chart.) 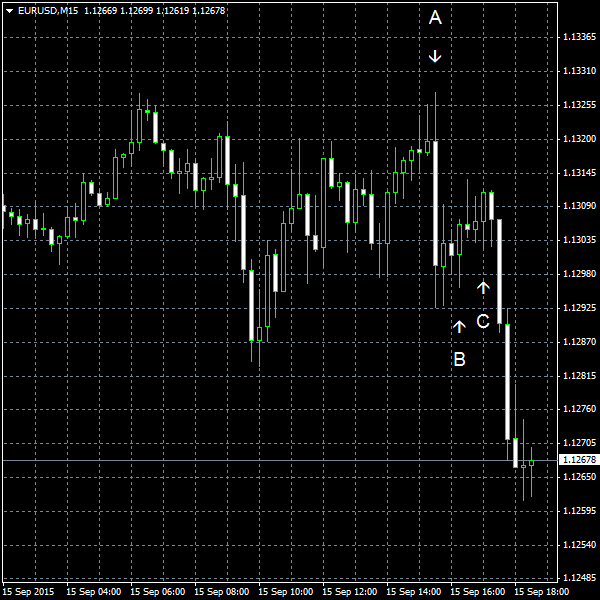