EUR/USD surged after the Federal Open Market Committee kept its monetary policy unchanged during today’s meeting. While the policy statement was not that different from the previous one, it was still considered rather dovish by markets. Coupled with the downward revisions to growth projections, this led to the crash of the dollar. Fed Chairperson Janet Yellen tried to show hawkishness during the , saying that an interest rate hike is still possible this year, but the market not did pay much attention to such claims.
Housing starts were at the seasonally adjusted rate of 1.13 million in August while analysts had promised them to stay at the July’s revised level of 1.16 million. Building permits were at the seasonally adjusted rate of 1.17 million compared to the consensus forecast of 1.15 million and the previous month’s value of 1.13 million. (Event A on the chart.)
Initial jobless claims fell from 275k to 264k last week. This means that analysts, who had promised the indicator to stay unchanged, were totally wrong. (Event A on the chart.)
US current account deficit shrank from $118 billion (revised, $113 billion before the revision) to $110 billion in Q2 2015, in line with expectations. (Event A on the chart.)
Philadelphia Fed manufacturing index was at -6.0 in September. Experts have predicted the same figure but positive (+6.0). The indicator was at 8.3 the month before. (Event B on the chart.)
FOMC did not change its monetary policy today. (Event C on the chart.) The Committee mentioned the international developments, likely meaning that the resent crash of the Chinese stock market that led to the slump of other global shares:

The Committee continues to see the risks to the outlook for economic activity and the labor market as nearly balanced but is monitoring developments abroad.

It looks like inflation is now the main indicator that the Federal Reserve watches: 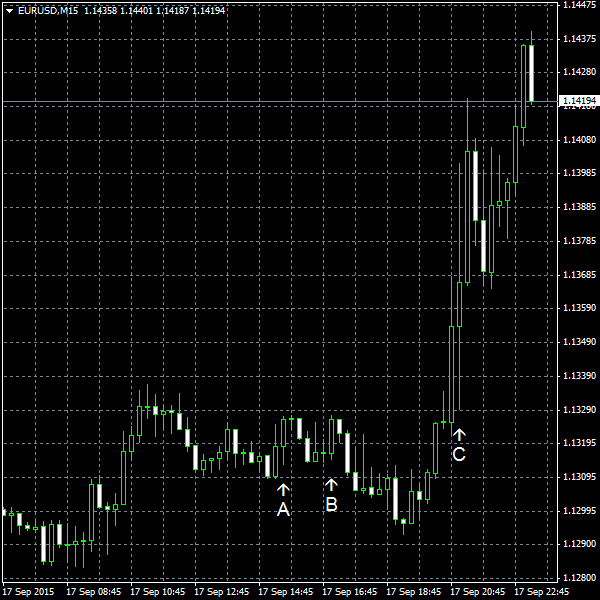