EUR/USD was rising for the most part of this trading week, and Friday was not an exception. The currency pair gained as traders considered yesterday’s minutes of the latest Federal Reserve policy meeting to be rather dovish. Such view reinforced the opinion that the Fed is not going to start monetary tightening in 2015. This, in turn, made the dollar a lot less attractive to investors.
Import and export prices dropped in September. Import prices were down 0.1%, demonstrating much smaller drop than the predicted 0.5% and the previous month’s 1.6% (revised from 1.8%). Export prices fell 0.7% following the 1.4% decline in August. (Event A on the chart.)
Wholesale inventories edged up 0.1% in August, matching analysts’ predictions. The July’s change was revised from -0.1% to -0.3%. (Event B on the chart.)
Following indicators are not shown on the chart:
On Tuesday, a report on trade balance was released, showing a deficit of $48.3 billion in August, up from $41.8 billion in July and in line with economists’ expectations.
On Wednesday, a report on crude oil inventories was released, showing an increase by 3.1 million barrels last week, compared to the forecast of 2.2 million and the previous week’s gains of 4.0 million. Total motor gasoline inventories grew by 1.9 million barrels.
Also on Wednesday, a report on consumer credit was released, showing an increase by $16.0 billion from July to August while experts had promised about the same rate of increase as in the previous reporting period — $18.9 billion.
Yesterday (on Thursday), a report on initial jobless claims was released, showing a drop from 276k to 263k last week while the median forecast was pointing at a much higher value of 274k. 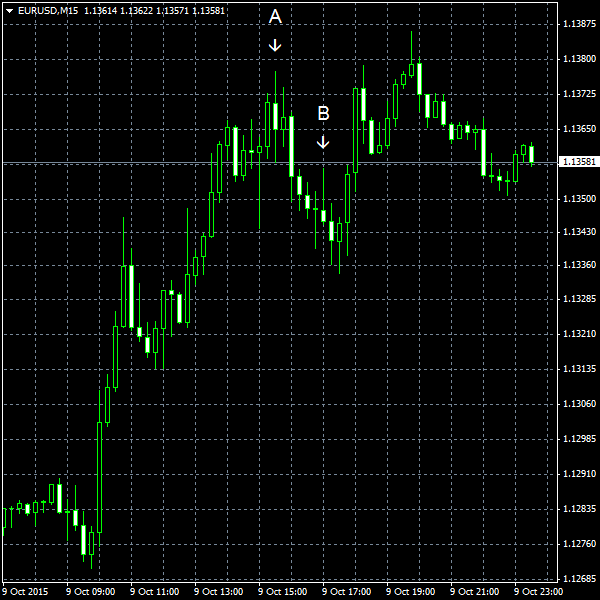