EUR/USD crashed after the Federal Open Market Committee hinted at the possibility of monetary tightening in its monetary policy statement. The Committee suggested that it may happen as soon as December. And this is exactly when the European Central Bank is expected to expand its monetary stimulus, at least according to speculations. Unsurprisingly, under such circumstances EUR/USD had little choice but to go down.
US crude oil inventories increased by 3.4 million barrels last week, close to the median forecast of 3.7 million and staying at the record level for this time of year. The stockpiles swelled by 8.0 million last week. Total motor gasoline inventories decreased by 1.1 million barrels last week but remained above the upper limit of the average range. (Event A on the chart.)
As was expected, FOMC kept monetary policy unchanged. Yet in an unusually bold language, it mentioned the possibility of an interest rate hike in December:

In determining whether it will be appropriate to raise the target range at its next meeting, the Committee will assess progress–both realized and expected–toward its objectives of maximum employment and 2 percent inflation.

Of course, such hint is opened for interpretation and does not guarantee a rate hike. Still, the statement caught doves off guard. (Event B on the chart.) 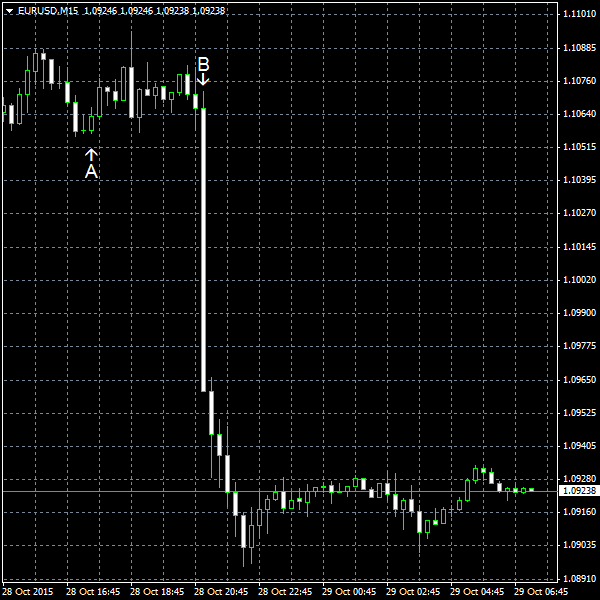